You are here: Home / Electrical Circuits / What is Cascade Amplifier : Circuit & Its Working

One of the most crucial devices in the history of the electronics domain is Amplifier. It is the device that acts in response to a minimal amount of current, voltage, or power and generated a larger output signal. This scenario is called amplification and it can be delivered by various devices such as generators, vacuum tubes, transformers. But these, people also utilize solid-state microcircuits in the place of amplifiers. In most situations, the output delivered by a single amplifier is not adequate and in these scenarios, the cascade amplifier is used. So, this article clearly explains the concept of Cascade Amplifier, its theory, the detailed analysis behind the device and its applications.

What is Cascade Amplifier?

Cascade amplifier is also termed as a multistage amplifier. It is the two-port network that is designed through a chain of amplifiers. Here, the output of one stage is fed as input to the next stage in a chain format. Because of the purpose of loading in between two stages, it is somewhat intricate to calculate the gain and it has imperfect coupling.

Cascading amplification is mostly preferred in the situations of long-distance, electronic controlling, radar, television, and in many calculating instruments. To cascade amplifiers, there exist multiple types of schemes and it is based on the signal behavior in the amplification procedure. When compared with vacuum tubes amplification, solid-state of microelectronics holds more benefits for directly coupling multiple amplifiers.  Even transformers are also implemented for cascade amplification, but they have heavy constructional design and expensive too.

In correspondence to the input signal, an electronic amplifier delivers an amplified output signal and this is termed to be linear kind of amplification. When there happens any modification in the shape of the signal, in the process of amplification, then amplitude distortion takes place. Or else when all the frequency ranges are not equally amplified by the amplifier, it is termed as frequency distortion.

Based on the type of connection of amplifier phases, there are various kinds of cascading amplifiers and those are as below:

As there are multiple stages in a cascade amplifier, the gain of the whole amplifier is known by multiplying the gain of each individual stage.

Where G1, G2,  G3, and Gn are the gains of individual amplifiers. When the gain of the cascaded amplifier is calculated in decibels, then the overall amplifier gain is given by

To design complicated systems, there are mainly three fundamental configurations in the cascade design. Through the cascading of amplifiers, the circuits deliver enhanced performance and greater efficiency. The basic analysis of the cascade amplifier can be known through the below.

The voltage between the two stages is

While the Vout in between output R and load resistance is

So, the entire gain of the circuit is given by

With the cascading method of common emitter which is followed up with a common collector, the stage delivers a better voltage amplifier. The CE resistance is correspondingly high whereas the CC (output resistance) is correspondingly low. The transistor Q2 stage provides no increase in the gain of the voltage but offers a close minimal resistance output so the gain is almost not dependent on load resistance values. While the maximized resistance at the Q1  stage shows that the CE voltage is not dependent on input source resistance values. Many CE stages might be cascaded with that of emitter follower phases so that this cascading procedure lessens attenuation that happens because of interphase loading. 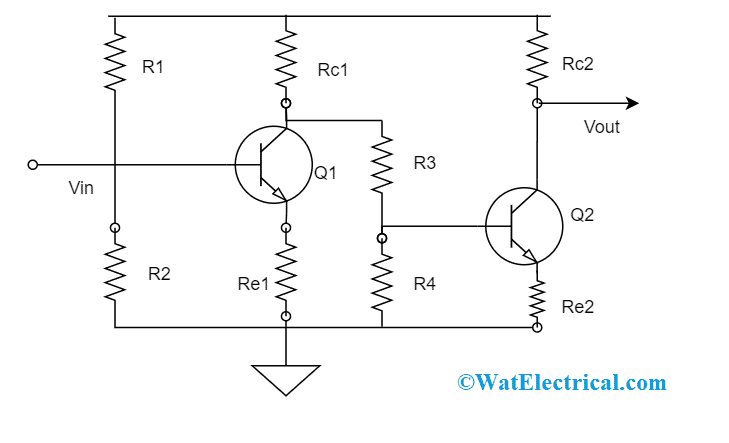 The cascade amplifier advantages are:

So, this is all about the concept of the cascade amplifier. Used in applications such as television systems, wideband amplifiers, and in good isolation purposes, these amplifiers hold more prominence in the electronics industry. But the only disadvantage is that when numerous stages are cascaded, the bandwidth will get reduced. The question that arises here is to know what are the other configurations in the cascade amplifier and how they are functioned?