You are here: Home / Electrical Machines / What is DC Servo Motor : Principle and Its Applications

A DC motor along with servomechanism (closed-loop control system) acts as a servo motor which is basically used as a mechanical transducer in the automation industry. Based on its accurate closed-loop control, it has versatile applications used in many industries. The DC servo motor definition is, a motor that is used in servo systems is known as a servo motor. A servo system is a closed-loop system where the feedback signal (position, velocity, acceleration, etc.) drives the motor. This signal acts as an error and based on controller, accurate position or velocity is achieved. The motors are coupled to an output shaft (load) through a gear train for power matching. Servo motor acts as a mechanical transducer as they convert an electrical signal to an angular velocity or position.

Consider the following block diagram which consists of the different blocks where the function of each block is explained in brief.

It is a normal DC motor with its field winding separately excited. Based on the nature of excitation, it can be further classified as field controlled and armature controlled servo motors

It is connected to a mechanical shaft of the motor. It could be any industrial load or a simple fan load.

It acts as a mechanical transducer to convert the output of the motor in the form of position, acceleration or velocity based on application.

It senses the position of the rotor and feeds it to the comparator. Commonly used sensors are hall effect sensors.

It compares the output of a position sensor and a reference point to generate the error signal and feeds to the amplifier. If the motor runs with exact control, then no error is zero. The gearbox, position sensor, and comparator make the system closed loop.

It amplifies the error from the comparator, for feeding into the motor. It acts like a proportional controller where the gain is amplified for zero steady-state error.

By making the system closed-loop exact position, acceleration or velocity is obtained. The name servo motor implies a controlled motor that gives the desired output because of the effect of feedback and controller. The error signal is amplified and used to drive the servo motor. Based on the nature of producing control signal and pulse width modulator, servo motors can have advanced controlled techniques using digital signal processors or FPGA chips.

The characteristic or in other words the requirements of a servo motor are:

In this motor, the field current is held constant and armature current is varied to control the torque. 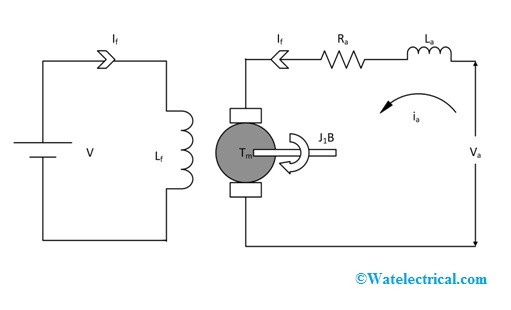 Eb = Back EMF produced by the motor

Applying KCL in the armature we get

The load torque equation is given by

Substituting i_a in the second equation and converting into the Laplace domain, the transfer function of the DC servomotor can be obtained as below:

The block diagram of the armature controlled DC servo motor is shown below.

The transfer function of armature controlled DC servo motor is shown below.

In this method of speed control, a variable input voltage is applied to the field winding of DC motor, while keeping the armature current constant.

Tm = Torque developed by the motor

B = Coefficient of viscous friction

The field equation is given by:

Torque equation is given by

Converting into Laplace domain, and substituting for field current we get the transfer function as:

The block diagram of field controlled dc servomotor is shown below.

The transfer function of field controlled dc servomotor is shown below.

Because of its precise control and accuracy, servo motor has numerous applications, a few of them have been enlisted below:

The advantages of DC Servo Motor are

The disadvantages of DC Servo Motor are

1). What is the transfer function of a Servo motor?

2). What is the principle of the Servo motor?

The principle of DC motor is Lorentz Force law, according to which whenever a current-carrying conductor is placed in the magnetic field, it experiences a force. When a DC motor is placed in closed-loop with feedback, it forms a servo motor, which converts electrical signals to mechanical i.e. acceleration, position, etc.

3). What is the difference between the DC motor and Servo motor?

4). What is the effect of feedback on DC Servo motor?

By including feedback, a servo motor can achieve precise position or velocity or acceleration with zero steady-state error.

5). What are the advantages and disadvantages of a Servo motor?

6). What are the applications of a servo motor?

7). What is the difference between armature controlled and field controlled servo motor?

For armature and field control:

Thus, this is all about an overview of what is a DC servo motor,  Its principle, characteristics, types of servomotor, the difference between the servo motor and DC motor, advantages, disadvantages, and Its applications.