We all might come across the situations of energy conversions either in our day-to-day life scenarios or in industrial purposes. So, for the conversion of energy, we need a device to calculate the unfamiliar quantities and calibrations. And the device that comes into invention is “Transducer”. As every scenario that we come across either directly or indirectly related to the energy conversion, there are many kinds of transducers and their application is widespread. Out of multiple kinds of transducers, today our article is more focused on the one foremost type and it is “Piezoelectric Transducer”. Let’s move ahead in getting familiarized with the concepts related to this.

What is Piezoelectric Transducer?

A piezoelectric transducer is a kind of electroacoustic transducer which is utilized for the conversion of mechanical force or pressure into other kinds of altering electrical energy. These transducers can be able to measure other physical quantities such as pressure, stress, and force as these quantities are not able to calculate in a direct approach. The output of the piezoelectric transducer which is the electrical voltage can be easily calculated either through any digital or analog meters. The term ‘piezoelectric’ corresponds to electricity that is generated by the force. Few of the kinds of these are

At first, we shall be clear on the concept of the piezoelectric effect. The application of varying electric fields on any piezoelectric transducer will generate an EMF and this deforms the material dimensions. So, this effect is termed as the piezoelectric effect. The force is plied to the materials with the assistance of the summing procedures. For instance, stress on the crystals is applied by pressure sensors, few types of mechanical pressure devices and a few others. The change in the dimension stimulates the EMF that defines the applied force value.

So, through the above statement, we can conclude that the whole piezoelectric materials might not be of piezoelectric transducers. Materials those are to be considered as piezoelectric transducers need to meet the necessities of increases output standards, constancy in frequency, being impervious to high temperature and humidity values and those might be obtainable in multiple shapes or they need to flexible to develop as various sizes and shapes showing no other variations in their properties. Quartz is one of the piezoelectric materials which can be employed as piezoelectric transducers. It is extensively stable and is naturally obtainable, whereas it delivers minimal output voltages. Only gradually differing factors can be calculated with this material. Whereas Rochelle salt shows maximum output values, but easily susceptible to atmospheric scenarios and it does not function above the temperature of 11500F.

For the piezoelectric material, the polarity of the charge is based on which direction the pressure is applied and the charge is represented as

Where d corresponds to the material charge sensitivity and

F corresponds to the applied force 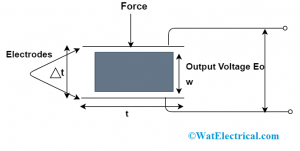 The Young’s module (Y) is derived as below.

‘w’ corresponds to crystal width and measured in meter

‘l’ corresponds to crystal length and measured in meter

So, by substituting force equation in the charge, the output is

Then the output voltage due to the electrode charges is

When there exists, crystal mechanical distortion, then the charge is developed across the electrodes.

The below circuit diagram will clearly explain the operation of how a piezoelectric transducer performs.

The best example of piezoelectric material, quartz crystal is given with a coating layer with silver and this is utilized as a sensor to develop voltage when there is the application of stress on the crystal. Here, a charge amplifier is included in the circuit so as to calculate the amount of generated charge having no dissipation. To deliver minimal currents, the resistance R1 has to be of high value. There is a lead wire which is used as a connection between the piezoelectric sensor and the transducer and this wire also shows its effect on the calibration values. So, there has to be a charge amplifier near the sensor. Thus, when there is the application of mechanical stress, a linear electric voltage is developed, and this is amplified through a charge amplifier. 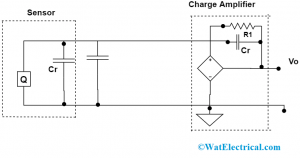 The amount of voltage that is developed is also based on the crystal alignment. The crystal might be arranged either in a transverse or longitudinal position.

Here, the amount of charge generated is given by

Where F corresponds to the applied force

Here, the amount of charge generated is given by

There are a wide variety of applications where a piezoelectric transducer can be implemented. Few of those areas below:

The advantages and disadvantages of the piezoelectric transducer consist of the following:

The price of piezoelectric transducer varies in the range of 500 – 600 INR per each unit. These range of transducers are available with manual operating systems and are in black and white. The power source of these is electricity and the surface area is painted. They are obtainable with a minimum warranty of one year.

These transducers operate with the reverse principle of what a piezoelectric effect function. When there is the application of electricity on the piezoelectric device, there happen physical bends based on the amount of applied charge.

As because of this, EMF is generated in L3 and it gets transferred to quartz crystal through P and Q electrodes. As because of opposing piezoelectric principle, the crystal initiates to expand and contract thus modifying the mechanical sensations.

Resonance happens when the oscillator’s electronic frequency is the same as that of quartz natural frequency. Here, quartz develops longitudinal ultrasonic currents which have high amplitude rates.

1). What is the use of a piezoelectric transducer?

The main usage of the piezoelectric transducer is to calculate the changes that occur in force, temperature, and voltage by converting these into electrical charges.

2). What is a piezoelectric device?

A device that functions on the piezoelectric effect is used to calculate the changes that occur in force, temperature, and voltage by converting these into electrical charge.

3). Is piezoelectric AC or DC?

The vibrations of these devices generate AC voltage

4). What is the purpose of the transducer?

Transducers are employed in energy conversions it means one kind of input energy is converted as another form of energy.

Thus, this article clearly explains the piezoelectric transducers, advantages, limitations & applications. This is the most progressing technology in the electrical scope. Because the cost of these is also economical, they can be easily implemented. So, allow your applications to be built upon these devices. Take an insight into what are the other concepts involved in this?