You are here: Home / Basics / What is Plasma Arc Welding : Working and Its Types

In the bronze age itself, the concept of welding was in implementation. An example of this is the making of gold boxes with the assistance of pressure welding. At the time of middle ages, the concept of blacksmithing was formed to weld iron pieces. Every consecutive year, there comes the evolution of a new type of welding and plasma arc welding is the one. This process was discovered by Robert M.Gage in the year 1953. The unique feature that made this process so prominent is its cutting ability on both heavy and slim materials. Let us get into detail on the concepts related to Plasma Arc Welding.

What is Plasma Arc Welding?

Definition: It comes under the category of liquid state welding approach where metals are joined in a molten style. Plasma corresponds to hot ionized gases that are used in the process and these gases are utilized to heat up the metal plates and the joint is created because of fusion. This process can be operated in two modes one melts in melt and the other is the keyhole. Melt in melt functions with minimal welding current and develops a welding pool that is in correspondence to the arc of GTAW. Whereas the keyhole approach functions with the more welding current to form the welding joints. 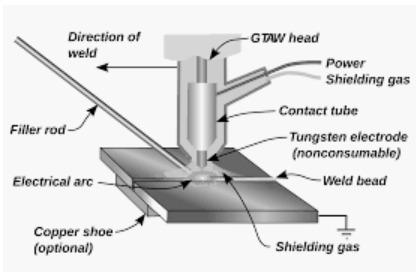 In this process, the hot ionized vapors are termed as plasma. When these gases are supplied with adequate energy, there will be a breakage of electrons from the nucleus and then they have a movement. After this, atoms move into the hot ionized phase. The maximum heat levels in the atoms are used for joining plates. This is the fundamental procedure of PAW. PAW procedure is extracted from the TIG welding where an arc is formed using a tungsten electrode. The produced arc enhances heat in the inert gases across the tungsten electrode and the heating temperature is more than 30000 C where gases are transformed into an ionized state so that welding joints are formed at this temperature through fusion.

A few of the components and equipment used in plasma arc welding are described below.

This welding process requires an increased DC source so that it develops electric ignition in between the welding sheets and the tungsten electrode. The electrode will get replaced by a discharge nozzle in the case of the non-transferred welding process. The feature that stands unique in PAW is its minimal ampere welding ability. Low ampere corresponds to a minimum of 2 amperes and a maximum of 300 amperes. For the appropriate functioning of this process, nearly 80 volts are necessary. The power supply source is included with a rectifier, managed console, and transformer.

In general, plasma gas is similar to that of protective gas where it is received from the same resource. Mostly Helium and argon are used as inert gases and even they are also used for shielding purposes. These gases are received from the exterior and inert control valves.

This is the crucial component of plasma arc welding. The torch used for both TIG and PAW processes is almost similar whereas it is somewhat complicated in PAW. A PAW torch consists of exterior and interior nozzles, collets and a tungsten electrode. The collect part which is present in multiple sizes holds the tungsten electrode. In the inner part of the torch, the interior nozzles release inert gases to create plasma. Whereas the exterior nozzles provide protective gases to safeguard the welding location from oxidation activities such as rust and corrosion. These plasma arc torches are dampened because the arc is present in the inner part of the torch where it generates heat.

Mostly, the tungsten electrode is used for PAW processes and the nozzles are made of copper material. The electrode edges are maintained at 30-600C. The plasma holes diameter is most important when it is more it might cause increased nozzle destruction or also melting. So, one has to be more careful in choosing the bore diameter for the proper functioning of the current levels.

Generally, no filler materials are used for the plasma process. If not when used these fillers are to be fed into the welding place.

Based on penetration levels and welding speed, PAW is classified as three types such as:

Whereas, the other classification of plasma arc welding is

Here, the power source that is used is straight polarity direct current and the negative and positive poles are connected to tungsten electrode and nozzle. Inside the torch, there will be a creation of arc and this will enhance the ionization of inert gases. The developed arc inside the torch is utilized for welding of thin out joints.

Here, the power source that is used is straight polarity direct current and the negative and positive poles are connected to tungsten electrode and work material. Inside the torch, there will be a creation of arc and this will enhance the ionization of inert gases. The developed arc inside the torch is utilized for the welding of deeper joints.

Base on the kind of torch, kind of inert gas, the shape of the electrode and velocity levels, plasma arc undergoes other procedures such as:

The advantages and disadvantages of PAW are as below.

1). Which gas is used in plasma arc welding?

In general, the most used gases are hydrogen, argon, and helium or a mixture of these three gases.

2). When was plasma arc welding invented?

Plasma arc welding was invented in the year 1953 by Robert M.

3). What is plasma arc cutting?

This process comes under the category of thermal dependent fabrication used for cutting of steel, metal sheets, and other alloys.

4). Can you use a plasma cutter to weld?

Mostly No because cutters are meant for plasma arc cutting and there is the availability of machines for welding approach.

An ionized gas where the required amount of energy is necessary to free up electrons. Plasma gases are the most general state of matter all across the world.