You are here: Home / Electrical Circuits / Electrical / What is Star Delta Starter : Circuit Diagram and Its Working

The starting of an induction motor is associated with high inrush current (magnetizing and load). This inrush of current which maybe four to five times the full load current(FLC) of the motor poses problems in the supply system and the motor itself. In order to restrict the inrush of current suitable voltage reducing starting device is to be used. Star Delta starter being one such device. It may be added that with the improvement in the supply system and the motor design has drastically reduced the use of these starters, this topic is now more of academic interest than practical.

What is a Star Delta Starter?

As we know that a three-phase induction motor has three windings one for each phase and as the start and finish of each winding are brought out we can connect them to the supply either in star or in the delta. The voltage applied to the winding in case of star connection is less than the voltage across the winding in case of the delta, therefore if a motor is started in star and then converted into delta through a starter is called a star-delta starter. 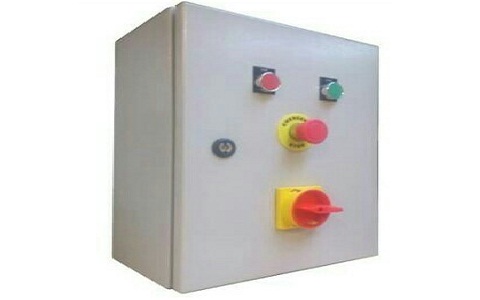 The motor terminal connection in the case of star and delta is shown in the above figure where U1 V1 W1 is the start terminal of each winding and U2 V2 W2 is the finish of each winding. L1, L2, and L3 are the three-phase line connecting terminals. In this configuration, we have made these connections externally for which we use the star and delta contactors. Two cables are also used for this purpose. The working of a star-delta starter is discussed below. 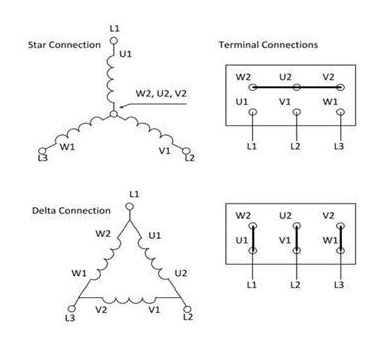 The above control circuit of a star-delta starter showing various elements of the power circuit will be used to explain its functioning.

When the control supply to the starter, then it is switched on through the MCB (miniature circuit breaker) it goes to the indicating lamp and single phasing preventer. Thru the ‘On’ button as the main contactor gets the supply it simultaneously switches on the star contactor making the motor run in star.

The star contactor also gives supply to the pre-set timer which starts counting. When the timer reaches its set time it switches off the star contactor and simultaneously switches on the delta contactor. Thereafter motor continues to run in delta till it is switched off from the Off button.

The shown circuit is of automatic star delta starter using timer and contactors in the low-cost application we can have manual change over through a switch.

It will be observed from the working, that at the stage of transition from star to delta for a moment the motor is in an open circuit condition ie. when the star contactor has opened and delta contactor has not closed. At this moment since the magnetic field is still present and the motor is in motion, it works as a generator. The closure of the delta contactor causes a high spike of current which is undesirable. To reduce the spike the motor must have achieved approximately 80% of its speed before delta contactor is switched on. For this, the timer adjustment is required which may vary from application to application.

1) Where is the star-delta starter used?

As stated earlier the star delta starter is left with a very limited use where the system regulation is very poor and the requirement of starting torque is low.

2) What will happen if delta connected motor is run in star?

If a delta connected motor is run in a star, it will draw almost one third the current it was drawing in the delta the torque will reduce therefore if the required torque is high it may not be able to run at all.

We need a starter to start the motor as per our requirement, to protect and monitor the motor and the supply system to which it is connected.

4) Why star delta starter is used?

It is required to restrict the inrush current of the motor which will be harmful to the motor and the supply system.

5) What are the different types of starters?

Thus, this is all about an overview of star delta starter. It can be concluded that although the applications of this starter are shrinking its study is of utmost importance. With the newly found application as a power-saving device in an industry where torque requirement varies widely. This has generated a renewed interest in its study. Here is a question for you, what is the function of a star-delta starter?