Initially, let us know what an autotransformer is, an autotransformer is the electric type of transformer that works only with one winding. The word “Auto” indicates that only one coil functions independently. Here, the sections that are present in the same winding operate as the transformer’s secondary and primary windings. Whereas, the general kind of transformer has individual secondary and primary windings. And then the invention of the autotransformer starter took place in the year 1908 by Max Korndorfer in Berlin and received the patent rights for the invention of this device in the year 1914. Later on, he assigned the device patent rights to the General Electric organization. Now, this article explains autotransformer starter working, its theory, and its uses.

What is Autotransformer Starter?

In the domain of electrical engineering, this starter is the method implemented for reduced voltage soft initiation of induction motors. Even though this device was invented by Korndorfer, the motor’s initiation technique was developed and enhanced by Hilton Raymond Bacon. This device is appropriate for both the delta and star way of connected motors.

In general, the autotransformer starters are used along with squirrel cage motors which have a power rating of above 20 HP. These squirrel cage motors that are operated on full line voltage through DOL starter derives huge starting current which might impose risk on motor winding and also increases the rate of current. So, the other approach is preferred for the initiation of induction motor and is called an autotransformer starter.

This is the basic autotransformer starter principle.

This device is considered one of the prominent electromechanical minimized voltage starters. The prominence is credited to the truth that this kind of starter might lessen the amount of inrush current in the system to the very minimum level of all the other types of electromechanical starters. Even, the starter’s taps allow for the modification of motor torque and voltage levels which suits perfectly to start many industrial loads. The autotransformer starter can be utilized with any kind of squirrel cage induction motor where the starter’s motor has a direct connection with the secondary winding of the autotransformer.

As because of the lower line, autotransformer starter holds more prominence of all the types of reduces voltage starter. Here, the starter generates more amount of torque per ampere of line current when compared with any other types of voltage starter devices.

Also, when huge motors are in operation for extended time periods in the circuit, then voltage drop might take place, which leads to the destruction of electrical devices that operate on the same supply line. As we are aware that current and voltage have direct relation which is V ∞ I. When there is a reduction of supply voltage, then automatic current reduction takes place. So, there are multiple ways of reducing voltage levels. 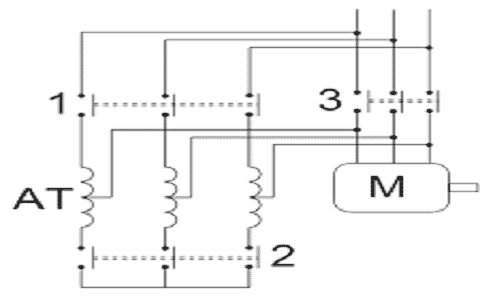 Though it has to be remembered that the transformer that functions the objective in those types of starter is not the general step-down transformer with unique secondary and primary windings. This transformer consists of just a winding that is used for both input and output.

At first, for the initiation of the motor, switches 1 and 2 will be in a closed state where this provides the motor with minimal voltage to be received from the autotransformer. The lower voltage level restricts the input current and also the motor’s torque level is reduced. The motor continually enhances its speed rate until the motor and load torque gets balanced and they come to a steady speed level.

At the balanced stage, switch 2 is in open condition and temporarily motor receives lesser voltage due to the reason that autotransformer windings perform as inductors that are in series connection with the motor. As the time is very less, the disconnection of switch 1 and connecting switch 3 is so simple where it connects the entire voltage level with the motor. Then, the speed increases rapidly and the motor reaches the maximum level of speed.

Now, the soft starting point comes to an end and the motor can initiate to be operated as complete load. The autotransformer starter is continuously needed and gets de-energized by making switch 1 to OPEN state. Through the 3-phase network, the motor gets a direct supply and to stopover, the motor, a switch is made to OPEN.

Whereas the controlling in autotransformer starter working is explained as follows:

When the device is operated by pressing the START button, then the timer (TR), shorting contractor (S), and the primary contractor (M) forms the circuit, and all these are energized. Then the motor receives a power supply from the autotransformer tappings. At the same time, the closed ‘S’ contact which is in series connection with the ‘R’ coil will be opened to obstruct S and R from getting energized.

The operation of the timer is initiated when the timing series of TR comes to an end and it comes to an OPEN state. This makes the ‘S’ contractor disconnect from the line and allows the shoring contractor to OPEN. Here, the autotransformer winding is in series connection with the same motor as the reactor and continues to operate smoothly. Then, after a minimal time gap, the TR contact gets closed, and this closes the ‘R’ run contractor and allows the connection of the motor with the mains supply. After this connection, the motor reaches to maximum speed level and then functions in normal operating conditions. 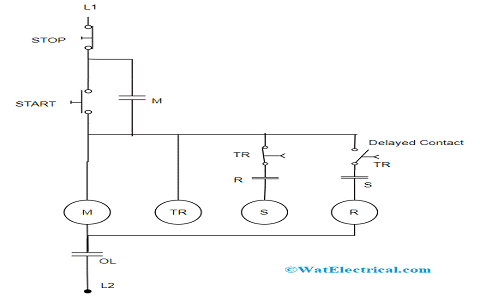 As because of the unique time delay design, normally open contact operates only after a short time gap of normally closed contact. This time gap is most crucial for the perfect functioning of the motor without showing any damages and risks. And after pressing the STOP button, the ‘M’ main contractor gets de-energized. This removes the connection of all other devices from the power line and the circuit comes back to its normal state.

As a brief, the starting sequence is explained as:

The advantages of autotransformer starter are explained as follows:

The disadvantages of autotransformer starter are explained as follows:

The applications of autotransformer starter are: