As we know that in the domain of electronics, capacitors are the most prominent devices which are extensively used in the design of various circuits. The key advantage of using a capacitor in electronic circuits is, its ability to store the electrical energy between its plates. These are the most considered components used for controlling the charge flow in the circuit. Capacitors along with devices like inductors and resistors come under the classification of passive components implemented in electronic apparatus. Even though the general capacitors are of integrated type, this article completely focuses on explaining various types of capacitors, their usage, symbol, and applications.

What is the Definition of Capacitor?

To be clear and accurate, a capacitor is a device that stores electric charge having one or more conductor pairs parted by an insulator/dielectric substance. The dielectric substances are the plates that are used for accumulating the charge where one plate stores positive charge and the other store’s negative charge.

The value of the capacitor is measured in the form of capacitance and this term is stated as the ratio between charge ‘Q’ and applied voltage ‘V’. This is represented as

So, this is the basic information of a capacitor. Now, let us know the capacitor types.

There are multiple kinds of capacitors, and they vary in their style, format, manufacturing, length, girth, and many other aspects. But every type holds its own advantages and disadvantages. Therefore, it is more necessary to know how each type works so that the correct type of It can be selected for the required application.

There exist many variations consisting of whether it is fixed/variable, leaded, not-leaded, and many others. So, with all these considerations, capacitors categorization is shown in the below picture.

Today, a few of those types of capacitors are discussed below.

These capacitors come under the classification of variable types. Here, a continuous capacitance is needed for the device in order to tune transistor radios, transmitters, and receivers. These are multi-plated air-separated types that consist of both the static (considered as stator vanes) and movable plates (considered as rotor vanes). The rotor vanes rotate in between the fixed plates and the rotation defines the entire capacitance value.

When both the fixed and movable plated are tightly interconnected, then the device shows the maximum value of capacitance. These devices with high voltage tuning have more air space between the plates so that the breakdown voltage reaches some thousands of volts. 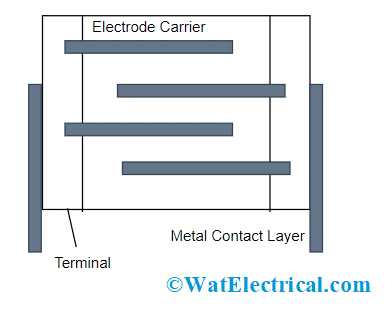 Based on the dielectric substance that is used in the device, these film capacitors are further categorized as:

The name itself suggests that the device uses a ceramic type of dielectric substance. This dielectric offers characteristics like minimal loss factor, good stability level, but this is based on the type of ceramic that is used. In general, ceramic dielectrics do not provide high capacitance levels per unit volume and because of this the capacitance range between some picofarads to 0.1µF.

The availability of ceramic capacitors comes in usual leaded devices and feedthrough variations, but the most utilized form is surface mount capacitor which can be called MLCC (Multilayer Ceramic Capacitor).

And also based on the temperature range, temperature drift, and tolerance value, ceramic capacitors are further categorized into:

This capacitor comes under the classification of film capacitors, and here a very thin plastic film is used as the dielectric substance which is polypropylene. The main availability of these capacitors is as leaded components, but not widely employed when compared with other types of capacitors, but it has its own applications in various circuits.

The characteristics of polypropylene capacitors are very minimal dissipation factor, low capacitance, and a minimal level of moisture absorption.

PP capacitors are applicable mainly for multiple domains in electronics and the applications are:

Tuning Type – This is used for continuous tuning of the oscillator circuit in radio or else in another circuit that is tuned.

Trimmer Type – This is a small type of variable capacitor that is typically used for one-time oscillator circuit’s internal regulation. 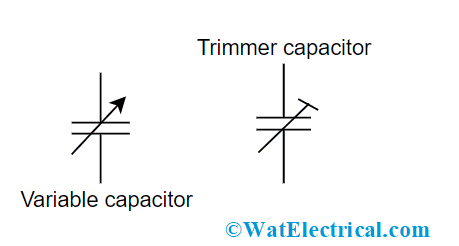 The usage of electrolytic capacitors is mainly in their high capacitance values. Here, a semi-liquid kind of electrolyte solution in a type of cream/jelly is used as a cathode which means the second electrode. The dielectric substance which is used here is a thin oxide layer. As because of the minimal thickness of the insulating substance, capacitors having high capacitance values can be designed where the spacing between the plates is also minimal.  The symbol of the electrolytic capacitor is:

In this type of capacitors, mostly all of them are polarized in nature which corresponds to that DC voltage which is provided to the terminal should be of appropriate polarity. In case of incorrect polarity, the insulating oxide layer gets breakdown and results in damage to the device.

Electrolytic capacitors are usually utilized in DC power supplies because of their high values of capacitance and also their minimal size assists in decreasing the levels of ripple voltage. But the drawback of using these capacitors is its minimal voltage rating.

The classification of electrolytic capacitors is

These capacitors possess increased precision, reliability, and stability. These are obtainable in minimal values and are mainly implemented at high-frequency levels, increased Q values, and minimal capacitor variation. The benefits of using silver mica capacitors are:

Even, these capacitors have more advantages, they are not more employed due to their high price and heavyweight. Using the extremely high level of compositional change in the raw substance makes the device more expensive. Whereas circuit manufacturers use silver mica capacitors for high power purposes like amplifiers, RF transmitters because other ceramic/porcelain type of capacitors does not hold the ability to tolerate high powers and heat.

The functional voltage range lies between 100 V to 10kV, the capacitance value lies between some pico Farads to a few nano Farads and the temperature coefficient is 50ppm/0C.

This is also signified as a fixed capacitor where the dielectric substance that is used is paper and here the amount of accumulated charge is constant. The device has two plates and a paper that is positioned in between the two metallic plates. The symbol of the paper capacitor is shown below:

Comparison of Various Types of Capacitors