You are here: Home / Electrical Circuits / What is Nodal Analysis : Features & Its Examples

We know that the electric domain is huge, and it all turns around electrical circuits and networks. So, analyzing an electric circuit is sometimes simple and in some cases, it turns to be too complex because we need to find out unknown voltages and current values at every node in the circuit. In order to make the circuit analysis process easy, there were mainly two approaches which are mesh and nodal analysis. Both techniques make the process of analyzing a circuit simple thus reducing the time and complexity. And today, here we are going to discuss completely on nodal analysis procedure, its features, what are its properties, and nodal analysis examples.

What is Nodal Analysis?

Nodal analysis is also called Node-voltage analysis/Node analysis or branches current analysis. The definition of nodal analysis is said that it is a technique of knowing the difference in voltage between the nodes in an electric circuit using branch currents.

As a part of circuit analysis, the KCL principle is used when the nodal analysis is used whereas the KVL principle is utilized when mesh analysis is used. In nodal analysis, equations are written at every node making sure that branch currents at a specific node totaled to be ‘0’ and the branch currents are represented in the form of circuit node voltages. As a result, every branch corresponding relation should provide a current value in terms of voltage.

For instance, when Ibranch = Vbranch * G, here ‘G’ corresponds to the resistor’s admittance.

The features of nodal analysis are:

Here is the step by step procedure of nodal analysis explaining analysis of a circuit.

To rewind, a nodal voltage is termed as variation in voltage between two nodes where a branch or component exists. Through nodal analysis, mathematical equations at each non-reference node can be known where the algebraic sum of currents at a node equals ‘0’.

And this section explains on types of nodes in nodal analysis which are mainly of two types.

The node voltages are utilized in the analysis of the circuit.

Reference nodes are generally termed as ground terminal nodes, and these nodes stand as references for all other nodes in the circuit. It is also called a datum node.

Chassis ground node – This node acts as a shared node for more than one circuit.

To construct a matrix equation, it is required to use the KCL principle at every node in the circuit. Using Kirchhoff’s law, equations are written corresponding to voltage drop at multiple elements to the currents entering into the node. To write a matrix equation, follow the below steps.

To clearly understand the matrix equation procedure, let us consider an example of nodal analysis. 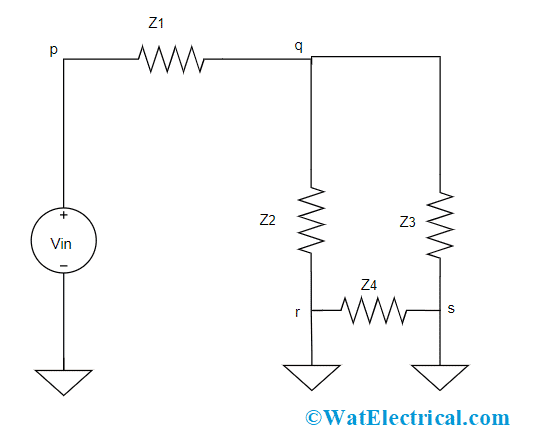 Consider the below circuit which consists of a voltage source, four individual nodes, and four impedance. Node ‘p’ is the input voltage that leaves the voltage at the other three nodes and those are to be known. Now, equations for voltages at every node has to be written and those are:

Arranging the above equations in matrix form gives

So, solving of matrix equation can be made easy by multiplying with the reverse of the coefficient matrix. As per the above circuit, there is a ground terminal that acts as a reference node where all the voltage variables are calculated corresponding to the reference node. The benefit behind this helps in closed circuit creation and sets the reference for the entire voltage variables present in the matrix.

The nodal circuit analysis is so simple, and it can be clearly understood using below example:

Example: In the circuit, find the node voltages. 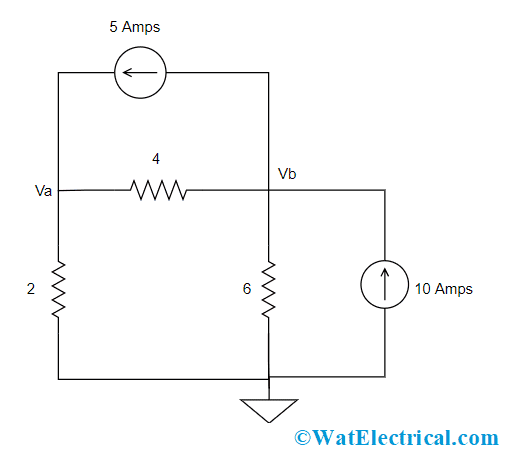 First, apply KCL principle at Nodes A and B

Then apply Ohm’s law for the above two equations

Through elimination procedure, the above equations are solved to get values of Va and Vb

There are two scenarios in the voltage source condition:

Scenario 2: When a voltage source is placed between two non-reference nodes, then a supernode is formed.

So, here comes the question of what is supernode?

The properties of supernode are:

With the below example, the supernode analysis can be clearly understood.

Example: Find the node voltages in the below-given circuit 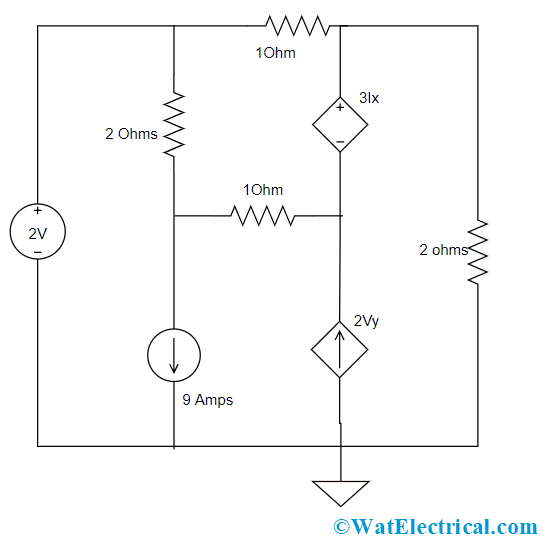 In the circuit, we have a supernode with two voltage sources, a resistor, and two nodes node A and node B. For the supernode, when KCL is applied, we have

Then apply, KVL principle for Ia and Ib using node voltage variable, then

In order to know the relation between Va and Vb employ KVL, then

From the above equations, we have

Here, a resistor in the circuit will not impose any problem in analyzing the circuit because is connected only across supernode.

Nodal analysis having a dependent source happens when the circuit consists of one DC current source and two DC type voltage sources. To understand the concept, let us consider the below example:

1). To find the number of nodes present in the circuit and label them. In the given circuit, we have a total of 5 nodes and so N = 5

2). Choose one reference node and mark it as a ground node. In general, the node which is at the bottom of the circuit is chosen as a reference node because it has a connection with more elements

3). Then assign variables for every node where the voltages are not known.

Node A acts as a general node and a dependent voltage source is placed between node B and node C, so nodes B and C creates a supernode. Node D has a connection with a voltage source where the other node is considered as a reference node. The voltages of each node are represented as Va, Vb, Vc, Vd, and correspondingly.

4). When there are dependent sources in the circuit, then the equations are to be written in the form of other node voltage values. So,

The node voltage at node C is Vb + 3Ix

Where ‘Ix’ is the current  across 2Ω resistor

It has to be noted that the path of Ix is from reference to node C. As it is generally expected that the reference node acts as a negative terminal for corresponding node voltages, the voltage at node C is given by -2Ix

By solving the above equations, we have

Therefore, the node voltage at node C is

5). In nodal analysis, the unknown values are written in the form of node voltages.

Here, Vb ≠ 2Vy, where 2Vy is the current across the dependent current source and this current is to be represented in terms of node voltages. Vy is the voltage between node D and node A. the positive end has a connection with node D and the negative end connects with node B.

6). Now, apply the KCL principle at every node in the circuit by making the total outflow current at the nodes to ‘zero’

At super node (node B and node C)

By solving the above two equations, we have

Difference between Nodal and Mesh Analysis

The below tabular column explains the major difference between nodal analysis and mesh analysis.

1). How Does Nodal Analysis Work on Nonlinear Circuits?

2). Which law is used in the nodal analysis?

3). What is the advantage of nodal analysis?

Nodal analysis is applicable for both planar and non-planar circuits and this is the best technique for circuits having voltage sources.

4). What is nodal analysis in an electric circuit?

5). What is the condition for nodal analysis?

The fundamental condition in the nodal analysis is that the branch currents at a specific node should be equal to ‘zero’.

6). Can you do nodal analysis with voltage sources?

Yes. The analysis of nodal analysis with a voltage source is the same as a current source.

Node voltage is the technique of solving simultaneous equations to know the voltage value at every node in the circuit.

So, this is all about the concept of nodal analysis. This article has provided clear and detailed information on nodal analysis procedure, solved example, nodal analysis with current and voltage sources, supernode and its examples. Also, it is recommended to know how nodal analysis works with resistors?