You are here: Home / Electrical Machines / What is Synchronous Reluctance Motor : Working & Its Applications

at stator poles. Due to its constant speed, the motor has few applications as compared to switched reluctance motor. One more disadvantage with this device, speed control is not possible, as the rotor is always locked to the stator magnetic field.

What is a Synchronous Reluctance Motor? 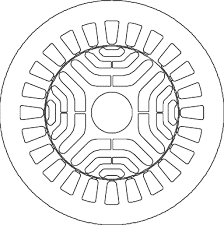 The fundamental concept behind the operation of this motor is the reluctance principle. When a ferromagnetic material is placed under the influence of the magnetic field, the magnetic lines flow through the material avoiding the path outside or surrounding the material. Since in the surrounding, the air is present and air has high reluctance as compared or reluctance of the materials. Reluctance is equivalent to resistance in the magnetic field. As we know that, the current always try to flow in the least resistance path, similarly, the flow of magnetic lines which is also called flux lines, try to flow in the least reluctance path.

This happens when the rotor fails to align with the stator. The damping torque produced, according to Lenz Law tries to oppose the reason for its production, which is the speed difference between rotor and stator magnetic field. Hence the damping torque pushes the rotor winding such that it gets magnetically locked with stator magnetic field. And afterward, the rotor runs on synchronous speed for the remaining time. The synchronous reluctance motor phasor diagram is shown above. The q axis and d axis are defined based on the two-axis theory of synchronous machine. Similarly, we can define Vd and Vq, which are the voltage across the d and q axis. Gamma is the angle between d-axis and stator current Is. This is also defined as a rotor angle. The synchronous torque produced is a function of the rotor angle. 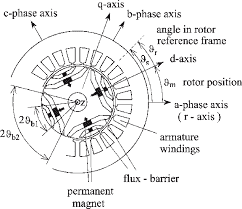 The rotor windings are made up of ferromagnetic material. The reason for this, since the rotor, has to align with stator magnetic material as per reluctance principle, therefore the reluctance of the rotor windings must be least. As shown in the figure, the armature windings are placed on the stator and the field winding is placed on the rotor. It is just the opposite of the DC generator. The reason is mainly due to insulation problems, and since the armature windings carry the armature currents, it is better to keep them static. The stator winding is excited with a three-phase supply as shown in the figure. In low rating machines, permanent magnets are used for rotor windings. They don’t need any separate excitation.

Due to its robust nature, the advantages and disadvantages of synchronous reluctance motor include the following.

The applications of synchronous reluctance motor include the following.

Mostly the motors are used in industry due to their property of speed control. But since the synchronous reluctance motor has a constant speed and speed control is not possible, it has very few applications. Like in conveyor belts, rice mills, paper mills, where constant speed is required.