You are here: Home / Electrical Machines / What is Synchronous Generator : Construction, Working & Its Applications

In the previous article, we have discussed the DC generator which works on Faraday’s law of electromagnetic induction. Similarly, the asynchronous motor also works on the same principle but the only difference is, this generator gives a 3-phase AC output voltage from stator windings whereas the DC generator gives the output like a DC or a single DC. The first synchronous generator was used in the year 1870 when the arc lamp was invented by P.N. Jablochkov which is named the Jablochkov candle.

What is Synchronous Generator?

Definition: A synchronous machine that works like a generator is known as a synchronous generator and also called an alternator. The main function of this generator is to generate commercial frequency current frequently by converting the mechanical energy from the main mover to an AC electrical energy at a specific frequency & voltage. These generators are used in the power industry in thermal power, hydropower, and generation of power in nuclear & diesel. 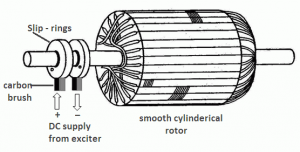 These generators are applicable for changeable speed wind turbine applications because of less revolving synchronous speeds. At a grid frequency, they generate the voltage and they don’t require a pitch control machine. This machine will increase the turbine cost and makes pressure on the generator as well as the turbine. The operation of these generators in changeable speed will produce variable frequency power as well as variable voltage.

The construction of a synchronous generator is shown below. The main parts of this motor mainly include a stator as well as a rotor. But in most of these generators, field exciters revolve and the armature coil will be immobile. 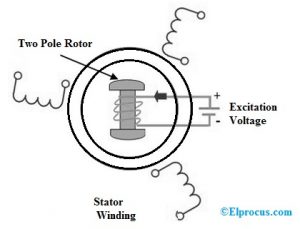 Not like in the DC machine, the stator of this generator is not used to serve lane for magnetic flux. As an alternative, the stator is utilized to hold armature winding. The stator core can be designed with a magnetic iron otherwise steel alloys lamination to reduce the eddy current losses

In the synchronous generator, there are two kinds of rotors used namely Salient type and cylindrical type.

The synchronous generator working principle is the same as a DC generator. It uses Faraday’s law of electromagnetic induction. This law states that when the flow of current is induced within the conductor in a magnetic field then there will be a relative motion among the conductor as well as the magnetic field.

In synchronous generator, the magnetic field is immobile & conductors will rotate. However, in practical construction, armature conductors are motionless & field magnets will rotate between them.

The rotor in the synchronous generator can be fixed mechanically toward the shaft to turn at synchronous speed (Ns) under some mechanical force which consequences in magnetic flux cutting in the stationary armature conductors of the stator. Due to this direct flux cutting result, an induced e.m.f and flow of current will be there in armature conductors. For each winding, there will be a current flow in the first half cycle after that in the second half cycle with a specific time lag of 120°.

The e.m.f equation of this generator is shown below.

Synchronous generator load characteristics are shown below. When the speed and exciting current are constant, then the thermal voltage will be changed along with the load current within the armature. The load characteristics can be defined as the main relationship between the load current & the thermal voltage of the synchronous generator.

As the armature current rises, then the terminal voltage falls because of resistance as well as reactance in armature winding, and armature reaction.
The graphical representation of load characteristics is shown below.

The synchronous generator excitation can be defined as the assembly of flux through flowing current within the field winding. The excitation system is the system that is used for the excitation of the synchronous system. Direct current is necessary for exciting the field winding of the rotor within the machine. DC supply can be given to the field of the rotor in the tiny machine through a DC generator known as Exciter. A mini DC generator like a pilot generator provides the supply to the exciter. Both the exciter & pilot exciter are placed on the main shaft of the generator.

The main exciter’s DC output can be provided to the field winding in the machine through slip rings & brushes. In small generators, the pilot exciter is eliminated.

The applications of synchronous generator include the following.