You are here: Home / Electrical Machines / What is Switched Reluctance Motor : Construction & Its Applications

What is Switched Reluctance Motor?

Definition: It’s a single phase electromechanical energy conversion device, which converts electrical to mechanical energy. The electromagnetic torque that is produced in a reluctance motor is due to the principle of variable reluctance. To obtain a variable reluctance, the poles must the excited with opposite charges, i.e, if one pole of the stator is south, next instant, it should be north. Such that this variable field will create a variable torque for the rotor to rotate. For the creation of a variable field, a switching circuit is used using power electronic devices. The switching circuits are triggered such that, a rotating magnetic field is created on stator poles. 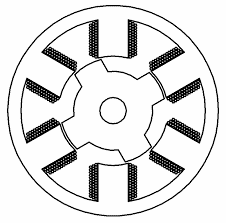 As shown in the figure, the outer part is stator poles and the inner parts are rotor poles. The stator poles are excited by a single-phase supply. For the case of synchronous reluctance motor, squirrel cage rotors are used for the creation of a rotating magnetic field. Since single-phase, supply cannot produce a rotating magnetic field. In the case of a switched reluctance motor, the rotating field is produced with the help of power electronics-based switching circuits.

The switches are numbered as per the switching sequence. The upper half of the circuit consist of switches 1,3, and 5. The lower half the circuit consists of switches 2, 4, and 6. The switches 1 and 2 i.e. each switch from the upper half and lower half at a time are triggered and these two forms one phase. Those two switches are connected to two poles on the stator. Similarly, 3,4 and 5,6 form the remaining phase and are connected to the other poles of the stator.

The three-phase supply is obtained from the inverter switching circuit. It can be noted that each device or switch conducts for 120 degrees and each switch is triggered at a delay of 60 degrees. Further, no two switches in the same are triggered at the same time, which will short circuit the source. Once a three-phase supply is formed and fed to the stator, the rotor tries to align itself to the rotating three-phase magnetic field and starts rotating. This is called variable torque. 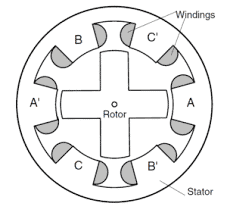 Also, these materials have less amount of hysteresis and eddy current losses. The rotor is stamped into the stator structure. In some cases, hall-effect based sensors are used to identify the position of the rotor dynamically. This gives scope for speed control of the motor. The construction of the motor is simple and robust with the least maintenance. It provides overall high efficient operation and speed control of the motor also becomes easy. Due to these reasons, reluctance motors are one of the highly used motors.

The characteristics of the switched reluctance motor can be summarised as

The disadvantages of the motor are as follows

Due to its versatility, switched reluctance motors are often used in

We have seen the principle and operation of switched reluctance motors. Due to the advent of power electronic devices, these motors have gained popularity. However, due to dependence on switching devices, they have some limitations. The use of hall-effect based sensors also improves the operation. It would be interesting to think about how to control the speed of the switched reluctance motor in a closed-loop circuit? Which controller would give a more efficient performance?