You are here: Home / Electrical Machines / What is Tesla Turbine : Design & Its Efficiency

Initially, a steam turbine is a kind of device which is available in the form of a heat engine. This turbine receives most of its development in the thermodynamic efficiency by using various levels in the steam expansion that outcomes in a similar approach like reversible expansion procedure. This is the very basic principle of the turbine. The first device that was originated in the classifications of turbines is a steam turbine which is very compact like a toy and this was developed during the 1st century by Alexandria in Egypt. The enhancement to this device (implementing a spit) was developed by Tagi al-Din in Egypt. Whereas the contemporary style of the turbine was invented in the year 1884 by Charles Parsons where it generates nearly 7.5 kilowatts of electricity. With this principle, there were many variations of turbines and the one which we are going to discuss in today’s article is Tesla Turbine and its concepts.

What is Tesla Turbine?

Tesla turbine is also referred to as a non-bladed centripetal flow kind of turbine where the original patent rights were gained by Nikola Tesla in the year 1913. The device is also called boundary layered turbine or cohesion type of turbine and also Prandtl layered turbine due to the reason that it makes use of boundary layered effect but not fluid which shows the effect on blades like the basic style of the turbine. Researchers in the domain of bioengineering define the tesla turbine as a numerous disk centrifugal pump. The tesla turbine diagram is shown below. 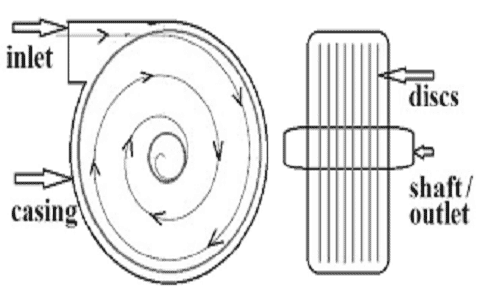 The principle thought behind the development of the tesla turbine was the fact to gain increased efficiency and the modification in the amount of velocity and fluid movement direction has to be as minimal as possible. So, pressuring liquid in the device moves in a natural direction or streamlines of minimal resistance. The device is included with a couple of disks having nozzles where fluid movement is applied to the disk edge.

The fluid is dragged onto the disk through adhesion present on the top layer of the fluid and viscosity. When the fluid slows down and increases energy to the disks, then it turns towards the center of the exhaust. As there exists no projection in the rotor, it stands as stronger. Telsa defined the statement that “the tesla turbine is an effective self-operating prime mover where it might be functioned either as a mixed turbine or as steam, without having any modifications in the manufacturing and seems to be very accessible”.

This is the basic tesla turbine theory and the below sections explain the turbine’s working, efficiency, and calculations.

The tesla turbine design is made with the below parts and those are explained as follows:

In the normal type of turbine, the rotor is considered as a shaft where blades are attached whereas here in this turbine the blades are away, and it uses few disks in the place of blades. The number and size of the disks will differ depending on the parameters corresponding to a specific application. On a general basis, there was no particular number defined for the number of disks to be used but employs few more disks defining that rotor should be included with a more number of disks having a suitable diameter.

Every disk is constructed with an opening where those surround the shaft. The openings function as exhaust ports where fluid will flow out through this. In order to ensure that the fluid passage is free in between the disks, metal kind of washers are included which perform as dividers. Also, the washer thickness is not exactly defined even the superseding spaces normally will not cross more than 2-3 millimeters.

The rotor section is accommodated in a cylindrical stator or by a stationary element of the turbine. In order to house the rotor, the internal section of the cylinder’s diameter has to be more than the rotor disks. Each ending edge of the stator is included with a bearing for a shaft. The stator section also comprises two inlets where nozzles are placed here. Having two inlets allows the tesla turbine to operate either in anticlockwise or clockwise directions.

The is the fundamental design of the tesla turbine. To operate the turbine, there will be a flow of high-pressure liquid where the fluid enters into nozzles through stator inlets. When there is a fluid passage in between the rotor disks, there happens spin rotation. Finally, the fluid runs out of exhaust ports where these are at the turbine’s center position.

The main advantage of the tesla turbine is its ease of design where the device can be constructed using available equipment and the spacing for disks cannot be exactly managed.

Here, a disk is a smooth device that is bladeless, with no vanes or buckets in order to collect the fluid. The logic in the device defines that the high-pressure fluid will pass across the disk which makes the device to be motionless. With this, the spinning of the rotor happens quickly. The device operates depending on the principle of the boundary layer. This is included with two inlets where one is utilized as an inlet for the turbine. The turbine comprises rotor disks where those are attached using bolts and placed on a single shaft. The turbine’s body is included with two cases which are rear and front casings.

In each casing, there will be 4-4 holes. The parameters such as the diameter of the disk, the total number of disks are crucial in finding out the tesla turbine efficiency. When air flows over the hose pipe, it enters into turbine body. When the air particles flow into a turbine, they create a drag on the rotor discs and because of this, the rotation of the disc takes place. As there are holes in casings, the air molecules will become out from these holes. The position of holes is arranged in the way that either water or air vortex is formed internal to the disc where this creates more drag on the rotor discs.

The contact area in between the discs and vortex is minimal at minimal speed levels. Whereas when the speed of air increases, the contact area will be increased allowing the discs to rotate at enhanced speed. The centrifugal pressure of the disc attempts to push the air towards the external location, but it has only one way to come out through rear and front casings. This causes the exit of air making the vortex more powerful.

This is how the tesla turbine works.

To achieve an increased level of efficiency, it is crucial to consider multiple design aspects. And one of the aspects is design calculations.

There has to less value of pressure either for operational fluid or inlet air. If the fluid is water, then the pressure value is 1000 kilos per cubic meter and the peripheral velocity must be (10e-6)2/sec.

The distance between the disc is measured depending on the peripheral and angular velocities of the disc. It is further dependent on the pollhausen measurement where it is constant depending on velocities. The flow rate for every disk is measured as the product of the disc’s velocity and area. In order to attain a good value of efficiency, the diameter of the disc is also considered a crucial parameter.

The tesla turbine efficiency is defined as the ratio of output and input power of the shaft. The expression is represented as follows:

Advantages and Disadvantages of Tesla Turbine

The tesla turbine advantages are as below:

The tesla turbine disadvantages are

The tesla turbine applications are as follows:

So the article has explained the design parameters, operating principle, calculations, uses, and drawbacks of the tesla turbine. As because of its minimal size, it is not most preferred for many applications when compared with other turbines like the Kaplan turbine. But the device holds good efficiency which allows its implementation in commercial applications like power plants. So, know how tesla turbines are operated in power plants?