We all know that transformer is the most crucial device in many electrical and electronic domains. This is considered as the passive device where the main purpose is to transfer electrical energy from one circuit to another or to many circuits. These are mainly implemented for increasing or decreasing the voltage levels in many applications. As we can state that device performance is noted by its efficiency, similarly transformer performance is known by its efficiency. So, this article mainly focuses on explaining the efficiency of the transformer, its formula, influenced factors, and improvisation methods.

What is the Efficiency of a Transformer?

Transformers are the components where act as a crucial connection between load systems and supply systems. The efficiency of the transformer is influenced by its aging factors and performance. In general, the rating of transformer efficiency lies between 95 – 99%. In the case of high-rated power transformers having minimal losses, the efficiency is nearly 99.6%. During loading circumstances, the input and output calculations are not considered because wattmeter readings certainly undergo few errors. That’s because, while calculating efficiency, it needs SC and OC tests to know transformer losses and core ratings.

The formula of efficiency of a transformer is given by:

Here, the output power is calculated as the product of the fraction of the load and the load’s power factor. And the losses are considered as the sum of (iron loss + loss in the stray load + copper losses in windings + dielectric losses). The iron losses are the sum of eddy current and hysteresis losses where these are shown as follows:

The dielectric loss happens inside the transformer’s oil. For transformers that operate with minimal voltage levels, these losses can be neglected. As the leakage flux is linked to the metallic frame, tank, and other components they develop eddy currents and these are present all across the transformer, so-called a stray loss. These stray losses are based on the load current, so the term stray load loss.

For ordinary transformers, the efficiency lies between 96 – 99%. So, it might not be possible to determine with high accuracy by using direct calculation of input and output because the losses are in the range of 1 – 4%. The difference between input and output device readings is so minimal that an error is as little as 0.5% might lead to an error in the range of 15% in the losses.

The best approach for the determination of transformer efficiency is to calculate from SC and OC tests and through this method, the calculation is as follows:

Copper loss during load with no. of times the full load is I22 R02 which is x2Pr. Here, I2 is the secondary current at the condition of full load

So, transformer efficiency is given by

In the above equation, the impact of the instrument readings is limited to losses so that the entire efficiency from this is very precise when compared with the efficiency level received from the direct loading technique.

It was noticed that during constant voltage conditions, the transformer’s mutual flux stays constant from no load to entire load where the greatest variation lies in the range of 1 – 3%. So, ion or core losses are observed to be constant irrespective of load. When the kVA output or square of the load, then copper loss varies.

The graph representing variation in a copper loss versus increment in load current is shown below. It also shows efficiency versus load, from the graphical representation it was very clear that the device delivers maximum efficiency even the load is minimal. In practical cases, the efficiency stays constant from 20% to 20% of overload. 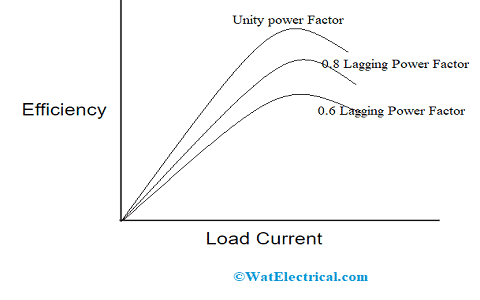 Load Current versus Efficiency of Transformer

Here, the value of V2 is almost constant and the efficiency is based on load current I2. So, the numerator values become constant, and the transformer achieves high efficiency when the denominator corresponding to I2 equals zero.

From the above equation, the output current I2 where the transformer achieves the highest efficiency is

This is the maximum efficiency condition of a transformer.

Whereas in few kinds of transformers, it is not possible to find the device performance through efficiency. To explain this, in the distribution type of transformers, they have the primaries energized at every time. Whereas the secondary windings provide minimal load at every time because electricity usage for domestic purposes is mainly at night times.

Due to this, when the transformer’s secondary windings do not provide ant load, then core losses are considered, and copper losses are negligible. The copper losses are measured when loads are present. Thus, copper losses hold more prominence. At these times, the performance is known by comparing the total amount of energy consumption in a day which is given by

All-day efficiency = output/input (both are measured in kWh).

A few of the factors that affect the efficiency of a transformer are:

Methods to Improve Efficiency of Transformer

The approaches of enhancing the transformer efficiency are explained as follows:

Thus, this is all about an overview of a transformer & its efficiency, its affected factors, formula, and determination of its maximum efficiency levels. Furthermore, the know-how efficiency of the transformer varies with the power factor?