You are here: Home / Electrical Machines / Electric Drive Working and Its Applications

When electrical devices like motor or generator are used in any application, we think that the rotation speed of these devices can be controlled only through the supplied voltage as well as the frequency of the current source. However, an electrical machine’s rotation speed can be exactly controlled by the ‘drive’ concept. By using this concept, motion control can be simply optimized. Now coming to its history, the first electric drive was invented by scientist B.S. lakobi in 1838. In the year 1870, almost universally the electric drive application is seen.

What is Electric Drive?

An electrical drive can be defined as, a system that can be used to handle the movement of electrical machines like motors or generators. This system is designed with an electric motor as well as a control system to manage the rotation of the shaft in the motor.

The prime movers used by this drive mainly include a petrol engine/diesel, steam turbines/gas, electrical & hydraulic motors as the main energy source. These prime movers provide mechanical energy for the drive to control its movement. At present, the movement of the motor can be controlled using the software. So that movement controlling will become more precise. 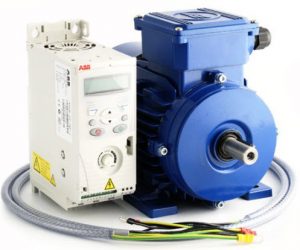 Generally, electric drives are available in 3 types namely group, individual, & multi-motor. In addition to these types, these drives are classified into different types depending on the various parameters which include the following.

The electric drive block diagram is shown below and the main parts of this drive include power modulator, motor, control unit as well as a sensing unit. These are explained in detail below. 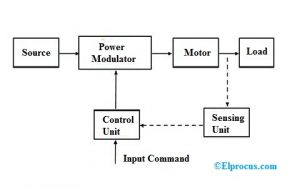 The power modulator mainly controls the o/p power of the supply. The controlling of this can be done from the power source to the electric motor. The motor supplies the speed-torque feature which is necessary through the load.

Throughout the transient functions namely starting, braking & speed reversing, the extreme current will be drawn from the power source. This may cause a voltage drop. So this modulator prevents the source as well as the motor current.

This modulator alters the energy based on the necessity of the motor. For instance, if the power source is direct current and the motor used is induction motor then the power modulator changes direct current to alternate current. It also chooses the operation mode of the electric motor like braking otherwise motoring.

Please refer to this link to know more about Electric Drive

This unit mainly controls the modulator which works with less voltage as well as power levels when required. The power modulator & motor can be protected by the commands generated through the control unit. The input command signal alters the working point of the electric drive from i/p to the control unit.

This unit detects the specific parameter of electric drives like motor speed and current. It is mainly used for the operation of closed-loop otherwise protection.

The electric motor is used for a particular application that can be selected through believing different features like cost, the power reaching level & required act through the load during the active operations and stable state.

The benefits of electrical drives mainly include the following.

The drawbacks of this drive include the following.

The applications of electrical drives include the following.

Thus, this is all about detailed information on an electric drive like block diagram, working, types, advantages, disadvantages, and applications. A system used for controlling the motion is named as drives. Sometimes motors are also called drives. Depending on its application, both the drives like AC & DC are used in industries. These drives are economical, pollution-free, give a long life, and easily movable from one location to another. These cannot work in the electricity failure. Here is a question for you, what are the types of the electric drive?