You are here: Home / Basics / What is an Alternator – Construction, Working & Applications

What is an Alternator?

Definition: It is a machine that converts the input mechanical power into an output alternating electrical energy. It works just like a generator. Hence, it is also called as AC generator.

It consists of a Yoke, pole core, stator, rotor, armature, slip rings, bearings, and fan. The yoke is the outer portion of it is used as a protecting cote for the machine. It protects against the environmental conditions such that the inner parts do not get damaged. It also gives mechanical support to the machine as well. Pole core is consists of pole shoe that gives support for the windings to rest on the pole shoe. The entire winding and pole shoe are considered as the pole core. The stator is the stationary part on which armature winding is wound. The rotor is the rotating part of the machine on which the field winding is wound. The clear view of the machine is shown in the figure below. 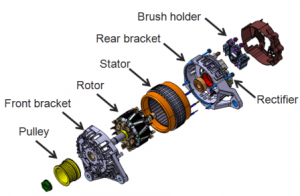 The armature core consists of armature windings, slip rings, and brushes. The armature develops armature current when the coil cuts the magnetic flux such that an armature flux is also developed. The slips rings are responsible for the smoother operation between the brushes in order to avoid twisting of the winding. The brushes are used for the collection of current from the slip rings. The bearings are employed for the operation to be performed smoother. A fan is employed is to exhaust the heat that is generated during the running conditions.

The constructional diagram of the machine is shown in the figure below. 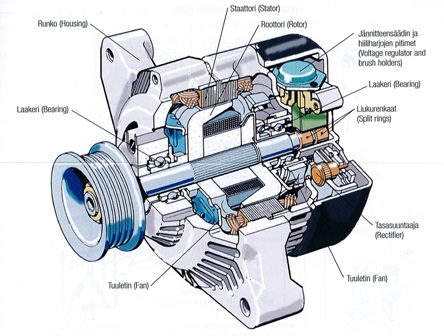 It works on the principle of faradays law of electromagnetic Induction. Any rotating machine when rotated in the magnetic flux works according to this principle. 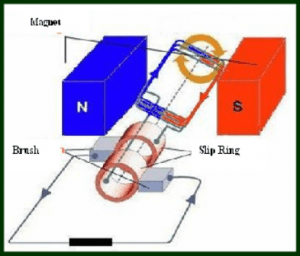 Working Principle of the AC generator

The flux linkages in this machine is given by

The emf equation of this machine is given by E = 4.44 ФfT

It consists of a more number of poles so, rotor diameter is large. It has a larger diameter and a smaller axial length. the prime movers or turbines used are of low speed such as hydraulic turbines like Pelton wheel, Kaplan, and Francis turbines. It is used for low and medium speed applications. These are used in hydropower stations and diesel power stations. These are also called as Hydro Alternators. The salient pole rotor type figure is shown in the figure below. 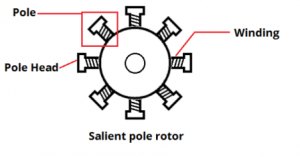 The number of poles used here is either 2 or 4. As the poles used are minimum, the rotor diameter is small and the axial length is larger. The speed of this type ranges between 1500-3000 rpm. The turbines or prime movers used here are of high speed such as the steam and gas turbine. These are used in steam power stations and gas power stations. The cylindrical rotor type machine is shown in the figure below. 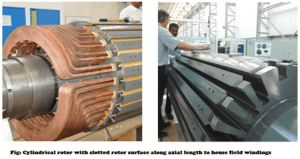 Difference between a Generator and an Alternator

Thus, in this article, we had an overview of what is an alternator. It is an AC generator and similar to that of a synchronous generator. It converts the input mechanical energy into the output of alternating electrical energy. Apart from this, we had also studied the construction, working, types, emf equation, parallel operating conditions, and its applications. Here is a question for the readers, is there any difference between an AC generator and synchronous generator?