You are here: Home / Electrical Circuits / What is Transformer Coupled Amplifier & Its Working

As the prominence of audio, video and other broadcasting technologies are enhancing day-by-day. There have to be certain amplification ranges to increase the quality and effectivity of the broadcasting signals. In the scope of this, the first amplification device that came into existence was a triode vacuum tube in the year 1906. There come many devices used for this cause and those are transistors, multistage amplifiers, and RC coupled amplifiers. As because of the few shortcomings in the RC coupled amplifier, the transformer-coupled amplifier got introduced. Let’s move ahead with the discussion of how the transformer-coupled amplifier is working, its benefits, and others.

What is Transformer Coupled Amplifier?

Definition: These amplifiers come under the classification of multistage amplifiers. Through the principle of coupling, one stage amplifier is connected to the next stage amplifier. This coupling scenario allows gaining impedance stability through the connection of the transformer. If any of the stages have high/low impedance values, it can be balanced when connected with the other stage. Because of this, power and voltage values are enhanced. In general, these are utilized for minimal load purposes and where power amplification is necessary.

The stabilization and the biasing networks are formed with the connections made through Re and the potential divider circuit (R1 and R2). The signal receives the minimal reactance path from the emitter by-pass capacitor which is CE. The connection for the transistor base and the AC signal is coupled through the input capacitor which is located at the first amplifier. So, the coupling capacitor provides a connection for both the amplifiers which also eliminates the DC intrusion in between the amplifier stages and handles the operating point shifting position. 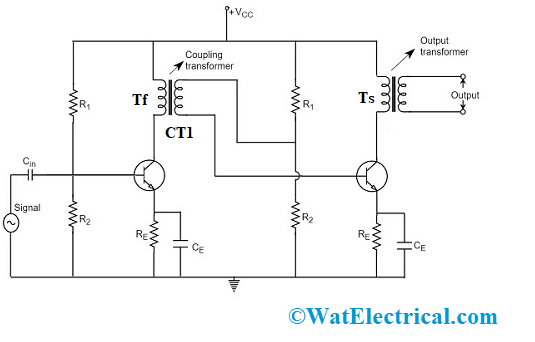 Transformer coupled amplifier working can be explained as follows:

When the base section of the initial transistor receives alternating current signal then the transistor amplifies the signal and the amplified signal is observed at the transistors’ collector section where it has a connection with the primary transformer. The coupling operation is performed by the transformer and even it holds the principle of varying impedance where it corresponds that minimal resistance value of the load might get reflected as the maximum resistance to the preceding stage. As because of this scenario, the voltage which appears at the primary winding is transferred to the secondary winding and it is based on the number of turns present in the transformer.

As frequency response corresponds to the measure of systems output respective to the input parameter and this is used to know the efficiency of the system. Here, in this circuit, the amplifier gain is always constant for a minimal range of frequency levels. The current across the collector multiplied by the primary winding reactance is similar to the output voltage value. At minimal frequency levels, the primary winding reactance will start to decline thus shows in minimal gain, whereas at maximum frequencies, the capacitance value between the primary and secondary windings performs as the bypass condenser to decrease the gain so that output voltage is also reduced. So, there will be the addition of few interference signals and the amplification levels are not similar to that of the input signal and are termed as Frequency distortion in the transformer amplified circuit.

The below diagram is the frequency response of the circuit. 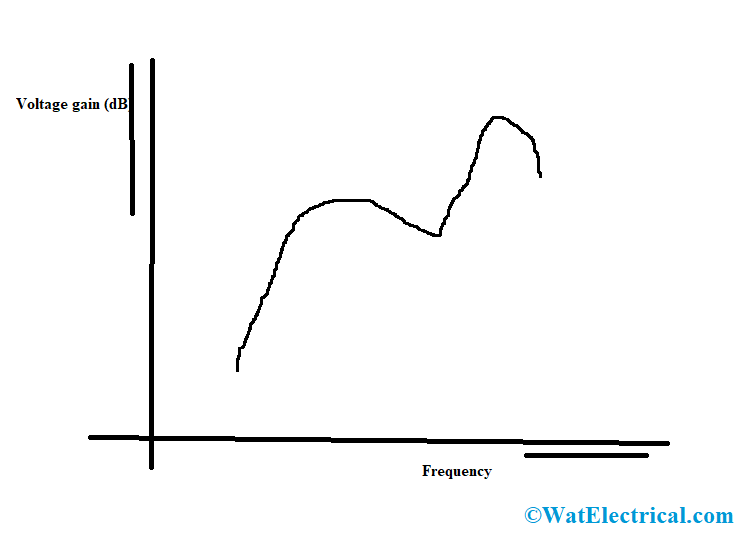 The advantages and disadvantages of a transformer-coupled amplifier are:

The applications of a transformer-coupled amplifier are:

1). Can the transformer work as an amplifier?

A transformer cannot be operated as an amplifier as the output and input power levels are similar and there will be no other source other than that of the signal.

2). What is the use of coupling in the amplifier?

Coupling is necessary to connect two amplifiers through a capacitor.

3). What is a coupling transformer?

A transformer is said to be coupling when the output of one amplifier is connected as an input to the other.

4). What is the purpose of RC or transformer coupling?

The functionality of the transformer coupling is to allow the alternating current signals and to block the direct current biasing voltages.

This is the comprehensive concept of the Transformer coupled amplifier and because it eliminates the drawbacks of the RC coupled amplifier, this circuit has more applications. The amplification of these devices can be enhanced through multiple coupling methods such as coupling capacitor and transformer. And the unique feature that allowed this device to gain more significance is its higher efficiency at the output. So, know more about what are the other features in the transformer-coupled amplifier?