The development of the electrical and electronics industry seems to be continually progressing with the invention of various electronic devices. The one device that has to be probably discussed is a Transformer. There is a wide range of applications through a transformer and just not with a single type of transformer, scientists have invented various kinds and each one has its own applications and advantages, either in commercial or real-life scenarios. So, let’s go have an overview of what a transformer is and what are the various types of transformers?

What is a Transformer?

So, basically, a transformer is defined as a static device that holds the ability to transform one circuit’s electrical energy to others through the means of electromagnetic induction. It can be either implemented to maximize (stepping up) or minimize (stepping down) the levels of voltage between the circuits. One might be in the thought of how there can happen the transform of energy. So, it is through the principle of mutual induction where the flux which is stimulated in the initial winding gets associated with the secondary winding. Only by increasing or decreasing the power and voltage levels, transfer of energy take place while allowing the frequency term to be constant.

It is a kind of transformer that has only one winding rolled on the laminated core part. This is the same as that of a two-winding kind of transformer but varies in the approach that both the windings are interconnected. Some part of the winding section is shared between the two windings. In the case of load, some part of the load current is acquired from the supply and the rest is acquired from that of transformer activity. It functions in the same way as a voltage regulator. 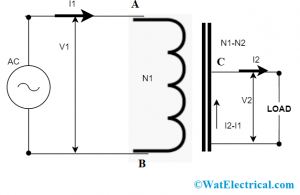 Here, V1 and V2 are the primary and secondary voltages
I1 and I2 are primary and load currents and
N1, N2 is the no. of winding turns across AB and CB

Here, the transformation ratio is represented as K

The implementation of autotransformer shows the benefits of less implementation cost, enhanced regulation, and negligible losses. Few of the applications are

To transmit increased voltages, power transformers are mostly utilized. Power transformers are available in various ratings such as 33 KV, 400 KV, 66 KV, 110 KV, and 200 KV. Most of these are rated above the range of 200 MVA. And generally implemented at transmission substances and at power generation stations.

Power transformers are absolutely effective to generate 100% output but are bigger in size. Uncomplete loading of this results in core losses whereas the copper loss is dependent on the distribution network’s load cycle. There will be minimal load fluctuations when it is coupled with the transmission system as these are not directly linked to the customer. But, when there is a direct connection, load fluctuations start to increase. 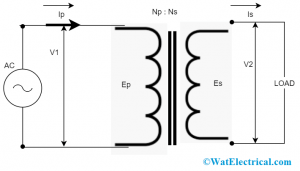 As the power transformers are loaded for the whole day at transmission stations, there will copper and core losses. These are economical when operated at minimal voltages. When there is an increase in voltage, the current is decreased, so there will be a reduction in I2R losses, and the voltage control is enhanced automatically.

So, efficiency is denoted as

The power transformer shows the benefits of

Isolation in the name itself indicates that separation. In general, a transformer is a device where the primary and secondary windings are connected to the main and load circuits. Whereas, in the isolation transformer both the windings are isolated (separated) from each other. Isolating transformers are mostly implemented when the oscilloscope calculates signals in the circuit that is not galvanically separated from the circuit.

The foremost benefit of these are; safe and people can be completely away from electrical shocks. Fundamentally, the secondary side of it is grounded. Even at the time of breakdowns, these devices can generate some voltage, because one of the sides is under voltage and can raise beeping sounds.

As these are constructed with electrostatic shields, they hold an enhanced ability to suppress noises and other interactions. A perfectly designed isolation transformer eliminates ground loops., where these develop additional current flow. And, this is one of the causes of interferences.

It is an optimized transformer used for the transmission of electrical pulses those have extreme fall and rise times maintaining comparatively constant amplitude. A trigger transformer is a kind of pulse transformer and implemented to instigate some sort of activity. Based on the variations of the factors like operating frequency, size, inductance, voltages, power ratings, impedance, and winding ability, the design of the transformer varies. Using the correct winding configurations, there reduces the scope of leakage inductance, interference, and winding capacitance.

The design of the pulse transformer varies as per the below conditions:

A few of the applications of pulse transformers are in-camera flash switches, digital communication, and logical devices, matching transmission lines with logic drivers. Also implemented in the electric power transmission domain to interface minimal voltage circuit board with that of increased voltage gates of power type of semiconductors.

This is used to show a specific path for the ungrounded structure or when the structure neutral does not exist, as because of this it is connected in the delta approach. Through this, a minimal impedance for the neutral and even regulates the transient extended voltage when there occurs any ground issue. Earthing transformers are connected as in the following approaches:

So, choosing of grounding approach is based on the below conditions:

Resonant transformers are used to generate high voltages that work on resonance phenomenon where XL = Xc. In resonant scenarios, the current flow through the test item is more and it can be limited by the implementation of resistance in the circuit. The circuit diagram of these transformers is included with a leakage resistance of the windings, resistance winding, both the shunt capacitance and magnetizing reactance that is throughout the end terminals because of the high voltage terminal.

At the condition of power frequency, series resonance can be obtained where it is represented as

Across the capacitance, the magnitude can be calculated as

The factor 1/(wCR) is considered as the circuit’s Q factor. So, the input voltage and kVA that are necessary for the excitation gets diminished by 1/Q. And also, the circuit’s secondary power factor is 1.

A few of the benefits of implementing resonant transformer are:

Audio transformers operate at the frequency range of 20 Hz – 20 kHz and they are mostly implemented in the audio amplifier systems. With the isolation property, these types of transformers develop isolation between the end speakers with the support of the transformer’s internal existing amplifier system. In that scenario, the proportion of both the windings has to be 1:1. Owing to this, the device will not change its current or voltage levels, it just develops isolation between the output speaker and input amplifiers.

Although there is no connection between the two windings, this transformer holds the ability to provide bidirectional support, and in this condition signal loss happens in one way and signal gain in the opposite way. This transformer makes use of an impedance balancing approach. The impedance ratio of the audio transformer can be calculated as

Where Zprimary corresponds to the primary impedance

Transformer cooling is the procedure of indulgence of heat that is generated in the transformer to the atmosphere. The losses that happen in the transformer are transformed into heat that enhances both core and windings temperature. So as to dissolve the generated heat, the cooling process should be done. And this cooling will be done in various methods such as oil, air, air-blast and many.

When compared with air coolants, the benefits of oil coolants are

In this category, the transformers amplify the input voltage based upon the number of turns.

In this category, the transformers reduce the input voltage based on the number of turns.

As shown in the figure, for this transformer, the turns on the secondary side i.e. N2 are less than turns on the primary side N1. From the fundamentals of transformers, it can be easily seen that E2 is greater than E1. This means that the secondary voltage is less than the primary voltage. Such transformers are used on the distribution side. Which is on the utility side. High voltage from the transmission side enters the step-down transformers, its magnitude is reduced and fed to the utility. The utility may be residential homes or industries.

Based on Core Construction

Transformers are also classified based on the core arrangement. Based on this they are classified as

As shown in the above figure, in a core-type transformer, the core is surrounded by windings. In the two limbs of the transformer, as shown the winding is wound. The limbs have equal dimensions.

The core type is also called a series magnetic circuit as the same amount of flux flows through both the windings. This name is given based on the equivalent current circuit. Such transformers are used for high kVA ratings since they can withstand more currents than voltage due to their series property.

As shown in the below figure, in a shell-type transformer, the windings are surrounded by the core. The windings are wound around the central limb. The dimension of the central limb is around two times the outer limb. But in core type, all limb dimensions are the same. The shell type is also called a parallel magnetic circuit. Since the flux gets divided into the two parts of the transformer.

Based on the Nature of Supply

The first word implies primary connection and the second word implies secondary. When we say star-delta, it means that primary is connected in star, and secondary is connected in delta. Each configuration has its own phase difference and even commercial name like Dd12 etc. The configuration of the three-phase transformer is one important criterion in nameplate details.

Based on the Use

Based on use, the transformers are classified as

Other Types of Transformers

Other types of transformers are discussed below.

In this transformer, the cooling is done by oil. Generally, these are used for low-rating transformers. The self-oil cooled transformers can be easily seen on the distribution side. One disadvantage with this category is oil needs to be replaced after a particular period. The healthiness of oil can be measured by a breather.

1. What are the most important transformer types?

There are mainly three kinds of the transformer, they are optical, electrical and electromagnetic.

2. What is the unit measurement of a transformer?

Transformer units are measured in kVA.

3. What is the difference between kVA and kW?

4. What is meant by OSR in transformers?

It is the Oil Surge Relay that is utilized in case of any issue that happens internally to the On-Load Tap Charger.

5. Why transformers are used?

Transformers are utilized to either step-up or step-down the voltage levels in an AC circuit.

Please refer to this link to know more about Transformer MCQs.