You are here: Home / Electrical Circuits / Electrical / What is Tesla Coil : Working Principle & Its Applications

Before the invention of the Tesla coil, air-core transformers and electrical oscillations were introduced and the first invention of the tesla coil was done by Thomson Elihu in the year 1889, then after the patent rights for tesla coil was gained by Tesla in 1891. The first-tesla circuit came to known to the public as having the elements of the capacitor, high voltage transformer, spark gap, and oscillation transformer.

What is Tesla Coil?

Tesla coil is considered as a resonant transformer circuit that is used for the generation of high range voltages, minimal currents, frequency AC electricity. The output is collected from 120v AC and transfers to driver circuits and transformers and then provides a high level of voltages. The delivered voltage level can be more than 1,000,000 volts and released in the form of electrical discharges. The distinctive feature of the tesla coil is its capacity of delivering high electrical fields.

Tesla coil principle is based on the principle of electromagnetic induction. As per this principle, when a conductor is kept under altering magnetic field, there happens induction of current in the conductor. In the Tesla coil, this conductor is termed a secondary coil and the generation of altering magnetic field is done by a primary coil through passing oscillating circuit through it.

The below picture shows the circuit diagram of the tesla coil. The circuit has two sections which are primary and secondary coils where each of the coils has its own capacitor. The capacitors are used for storing electrical energy just like how the battery performs.

The connection between the coils and capacitors is established by a spark gap which means that it is an air gap that produces an electric spark. The power to the entire circuit is supplied by the transformer which is hooked up to an external source. Mainly a tesla coil can be considered as two open electrical circuits which are coupled using a spark gap.

In general, a tesla coil requires a high level of power source, and this can be provided by a transformer supplying the required amount of power in the range of thousand volts. In this situation, the transformer holds the ability to convert low voltage to a high level. Also, sometimes a capacitive electrode is used in the circuit which is connected to the coil’s secondary terminal. The electrode’s huge area removes any kind of arc discharges and air breakdowns thus enhancing the output voltage level and Q factor.

This resultant extensive frequency voltage level might lighten up fluorescent bulbs which are at more distance having no wiring connection. In a perfect tesla coil, at the time when the secondary coil comes to its maximum range, then the entire procedure starts, and the device gains the capability to be self-capable. Whereas, in the real-time scenarios, this does not take place. The air which gets heated in the spark gap draws out some amount of electricity from the secondary coil into that spark gap which finally makes the tesla coil to be out of energy. Because of this, the coil should be constantly hooked up to the external power supply.

And the theory for the tesla coil is to accomplish the resonance phenomenon and this can be achieved when the primary coil pulls current to the secondary coil which corresponds that it is the correct time to increase the energy that is transmitted into the secondary coil.

This is the tesla coil working principle and how it generates voltage.

In order to generate high output voltage levels, both the primary and secondary circuits are adjusted to be in resonance with each other. So, the resonant frequencies in both circuits can be known by inductance and capacitance values in the circuits.

Here, ‘f1’ corresponds to the resonant frequency in the primary tuned circuit and

‘f2’ corresponds to the resonant frequency in the secondary tuned circuit

In general, the secondary circuit is not adjusted and so the primary circuit is tuned until the resonant frequencies of both matches.

At the resonance condition,

Tesla coils can be categorized into multiple types depending on the kind of excitation they utilize, the circuit type which is used for supplying power to the resonant transformer’s primary winding, and the number of coils present in the tesla circuit. Here, are the few types of tesla coil circuits. 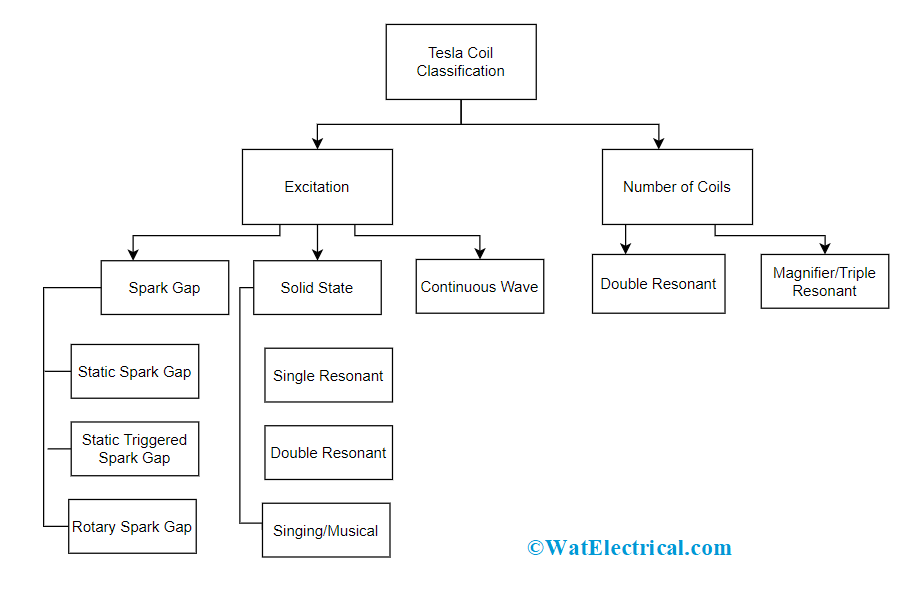 Here, a spark gap is utilized for closing the primary circuit, and to excite the oscillations in the transformer. The other features of this type are high noise is produced when the device is operating, produces harmful ozone gas and an additional cooling system is needed because of high temperature levels.

In the solid-state tesla coils, power semiconductor equipment such as transistors, IGBTs, thyristors which are triggered by oscillators is used for switching the voltage pulses from the direct power supply via the transformer’s primary winding. These devices generate pulsed excitation showing no drawbacks like huge noise, increased temperature levels, spark gap, and minimal efficiency.

And also, the frequency, waveform, and voltage levels can be easily manageable.

Here, a feedback oscillator is used for driving the transformer where current pulses are applied for the primary winding so that continuous excitation is provided. The primary circuit functions as a tank circuit for oscillators and the circuit is similar to a radio transmitter.

The output from the continuous-wave tesla coil circuit is a continuous sine wave. Also, as a substitution for transistors, vacuum tubes can be used where these can perform as active devices in tolerating high load levels. Generally, continuous excitation delivers minimal voltage levels when compared with pulsed excitation.

The benefits of using a tesla coil are:

The drawbacks of tesla coil are:

The applications of tesla coil are explained as below:

CRT displays – Tesla coils are also used in various CRT displays such as in PC monitors, laptop screens, television screens, and many. The tesla coils that are used in CRT displays are termed flyback transformers. These offer a high level of voltages so that electron acceleration takes place from electron gun to phosphorous coating which is present in the screen.

Welding devices – Tesla coils can also be utilized for welding equipment. In the case of aluminum welding, few devices employ tesla coils for the generation of high-level frequencies so that arc is formed without having contact with the metal electrode. In addition to this other approaches can also be used because the tesla coil seems to be uneven, and reliable.

Spark ignition – A tesla coil that is filled with oil is called an ignition coil. This coil is used in combustion-powered vehicles that are used for supplying high voltages to ignite the spark plugs. Cars having ICE and operating on gasoline utilize tesla coil for the ignition of the spark plug.

Finally, this is all about tesla coil. This article has provided a complete explanation of tesla coil working, its types, how voltage is generated, its uses, and its advantages. Also, know how Tesla coils are used for practical facets of designing?