Excitation, the literal meaning is different in each stream of science and humanity. It is an increased activity of cells/organs in biological science in chemical science it is increased activity of various molecules and so on. In electrical engineering, the magnetic effect of current and its field which is known as excitation and only after an electrical machine gets excited it is ready to perform other functions like rotation/motoring or generation, etc. This article discusses an overview of what is an excitation system and its types.

Let us now see, what are the various types, based on their classification which can be done as under.

Classification based on the Method of Application

Separately excitation is where separately current is supplied for the purpose of exciting the machine. The best example being synchronous induction motor/generator

Classification based on the Type of Supply

Classification based on the type of supply includes the following.

This is the one where the supply is AC current which may or may not is converted into DC supply. This system consists of a converter/battery, the convert may consist of a thyristor rectifier bridge directly connected to the main alternator shaft. The main exciter may either be self-excited or separately excited. In case of separately excited an additional converter or battery may be used.

Classification based on the Method of Generation of Excitation Current

Classification based on the method of generation of current includes the following.

The static type system is the one produced through static devices like Diodes, thyristors(SCR), IGBTS, etc. And other power electronic devices. By controlling the firing angle of the SCR’S we are able to regulate and control the field voltage. 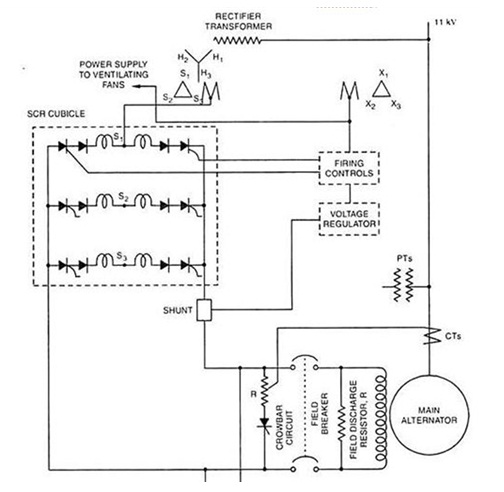 The main exciter has a stationary field that directly connects to the alternator field through silicon controlled rectifiers. This system has a very fast response due to the elimination of commutator and brushes etc. 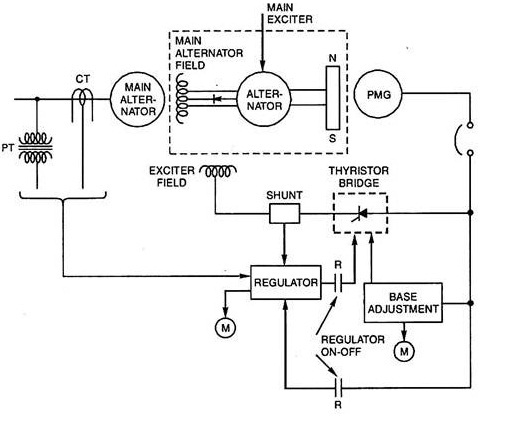 Rotating Thyristor type system is the most commonly used system for small/medium size of generators in the semiconductor devices that are mounted on a disc that rotates along the excited shaft. This system provides both auto and manual voltage adjustment which is clear from the block diagram shown. 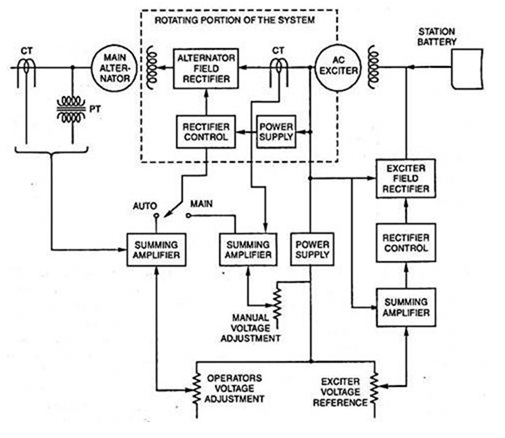 The field of the AC exciter can also be provided through a station battery which is very useful during blackouts.

The exciter output is rectified through a converter using controlled full-wave rectification and is fed to the main alternator excitation.

The automatic voltage regulator plays an important role by sampling and comparing with the set value, and bringing back as near as possible to the set value of terminal voltage. In addition, it also provides protection against over and under-voltage.

1). what is excitation current?

The magnetizing current required to produce flux and it is necessary for the generation of electrical power or motoring.

2). What is the role of excitation in controlling power factor?

3). In a DC shunt motor what happens to RPM if the excitation is weak.

In a DC shunt motor which is very commonly used in industry, motor rpm is inversely proportional to excitation. Therefore a weak field will increase the rpm of the motor dangerously. In fact, DC shunt motors are protected against a weak field.

4). In high-efficiency induction motors, how do we reduce the excitation /no-load current/magnetizing current?

In high-efficiency induction motors are permanent magnet type and have very low reluctance,(the gap between rotor and stator is reduced to a minimum) therefore do not require magnetizing current.

5). What is the purpose of piolet exciter in the case of the brushless excitation system?

In a brushless excitation system, a piolet exciter supplies the current to the main exciter which in turn supplies to the main alternator/generator field Thus eliminating the use of commutator and is used for large generators.

6). The excitation current is lagging in nature, why?

This current is lagging in nature because it mostly feeds the inductive load which draws current at a lagging power factor.

7). Why it is necessary to connect the automatic voltage regulators on the field side of a large alternator or DC motor.

It is necessary to connect an AVR to field supply of a large Alternator or a large Motor as a slight change in field voltage/current will produce a large variation in terminal voltage of an alternator and speed variation in a DC motor.

8). What will happen to the excitation of an ac motor if Voltage/frequency ratio increases

Thus, this is all about an overview of excitation and its classification based on the method of application, the type of supply, the method of generation current. Here is a question for you, what is the function of an alternator?