You are here: Home / Basics / Universal Motor : Working and its Types

We know that there are different kinds of electric motors available in the market such as single phase, self-starting induction, slip ring, etc. This article discusses a unique kind of electric motor. Imagine an electric motor that works on both AC and DC. This motor is named as a universal motor. As the name suggests, the working ability of this motor mainly depends on AC & DC with related characteristics. This motor also includes a high starting torque & uneven speed characteristics. This motor performs at hazardously high speeds throughout the no-load period.

What is the Universal Motor?

A universal motor can be defined as, a motor that works on either an AC supply or DC supply. This is the reason to call this motor as a universal motor. This motor is also known as a single-phase series motor. The characteristics of this motor mainly include changeable speed and transmitting torque is high. These motors run at hazardously high speeds throughout the no-load condition. In this motor, the two windings like armature as well as a field are connected in series to produce high starting torque. So these motors are connected within the device to drive the load. Most of these motors operate at higher speeds like above 3500 RPM. When this motor uses AC supply, then it runs at less speed because of the voltage drop in reactance. 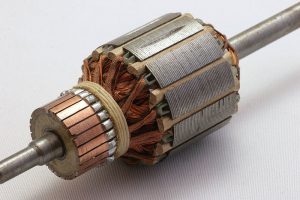 The working principle of this motor mainly depends on either the AC supply or DC supply. Whenever the motor uses a DC supply, then it performs like a DC series motor. When the flow of current is there in the field winding, then it generates a magnetic field. The equal flow of current will be there from the armature conductors.

Once a conductor that carries current is located in an electromagnetic field, then the mechanical force will be applied to this to make the rotor to rotate. This force direction can be given through the left-hand rule of Flemming.

Where ‘I’ is the current flow through the windings

‘L’ is the conductor’s active length.

Universal motor construction is extremely related to the DC machine’s construction. The components of this motor mainly include stator, rotor, exciters (brushes), and covers. It includes a stator where field poles are arranged. But, the complete magnetic lane is coated to reduce the eddy currents. These will provoke while working on AC. 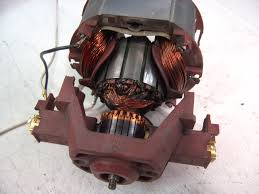 The rotary armature in the motor is wound type which has skewed or straight slots, and commutator including brushes inactive on it. The commutation over an alternating current is poorer compared with direct current due to the induced current within the armature coils. Because of this reason, brushes in this motor have high resistance.

Universal motors are classified into two types which include the following.

This motor can be built with two significant poles and it is laminated. The armature in the motor is wound type, as well as the core which is laminated, is either skewed or straight slots. The winding leads can be connected toward the commutator. This kind of motor uses high resistance brushes to assist enhanced commutation.

This kind of motor includes distributed field winding & the stator core is related to the split-phase motor. As we know that these motors include an auxiliary winding additionally to major winding. Same as the split-phase motors; this kind of motor includes an extra winding. The compensating winding will decrease the reactance voltage, caused by alternating flux while the motor works using the AC supply.

One method is used for designing the motor into a device to stop the motor from running at no-load condition. These motors are used in the applications where the motor is directly connected to the system to drive.Also, they progressed numerous techniques to fix the RPM of the motor. One method is using a gear train for decreasing the speed of actual load and other methods are a centrifugal mechanism, resistance, and field tapping.

The advantages of the universal motor include the following.

The disadvantages of the universal motor include the following.

Thus, the universal motor is a kind of electric motor and the working of this motor mainly depends on AC and DC. Its construction is the same as to DC series motor with some changes. Here is a question for you, what are the types of universal motor?