You are here: Home / Electrical Circuits / Electrical / What is a Clamp Meter : Operating Principle & Its Types

A clamp meter is one of the common devices used to measure the current flowing in a circuit. The best advantage of this device is, it need not be brought in contact with the circuit. We need to clamp the ports around the wire and it will measure the current flowing through the wire. Unlike a multimeter, where it needs to be connected to the circuit, this meter can measure current without getting in touch with the circuit itself. It can be used to measure both AC and DC currents. It can even measure currents up to 100 A. It is very commonly found in industrial, laboratory applications where it is frequently used for measurement of current. It’s a substitute for a multimeter. It can measure current without interrupting the circuit itself.

What is a Clamp Meter?

It is a device used for the measurement of currents, without interrupting the circuit itself. It can measure both AC and DC currents flowing through the wire. It even distinguishes the direction of current flowing in a particular circuit. If we clamp the leads in the opposite way, then it will be shown a negative symbol before the magnitude of the circuit on the display. 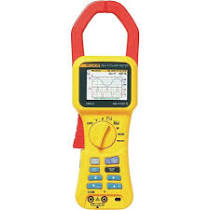 Meters measuring AC and DC are different from each other. The meter can measure current up to various levels. It can even measure the current of milliampere range. The meter comes with an even high resolution of 0.1 mA. In terms of accuracy, a clamp meter is slightly less accurate than the conventional multimeter.

The meter diagram is shown above. As indicated, 1 indicates the clamps which are used to put on the wire. Also called as leads, when kept around the wires, it indicates the current flowing in the particular wire. 2. Acts as support to 1. The windings are placed in 2. 3 represent the clamps push-type hinge, when pressed the clamps will be opened.

When the current is needed to be measured, the first 3 is pressed, the clamps or leads are opened, they are kept around the wire in which the current to measured is flowing, and then the magnitude of current appears on 4. 4 is four display. 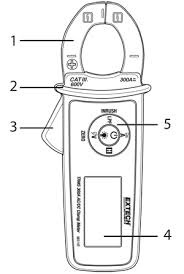 Generally, it’s a LED display with up to 4 digits accuracy. 5 is the mode in which the clamp meter needs to be set. If we want to measure, AC or DC current, that setting can be done at 5. Some clamp meters even have external leads and they can be also used to measure current by interrupting the circuit. But by using the clamps, we need not interrupt the circuit.

An AC meter is used to measure the AC currents. Whenever the AC current flowing through the wires is placed in between the clamps, the current is measured and its value is displayed. AC clamp meter working is discussed below. 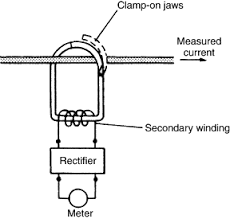 A DC clamp meter is used to measure the DC currents. Whenever the DC current flowing through the wires is placed in between the clamps, the current is measured and its value is displayed.

The working of DC meter is different than AC  meter. In the DC meter, the electromagnetic induction principle will now work. Since the current is static in nature, and the coil is also static in nature, so there is no relative displacement between the coil and the magnetic field. Therefore the no emf would be induced on the secondary winding. But since the primary winding consists of current, a primary emf of static in nature is induced in the primary core.

How to use a Clamp Meter?

The meter is generally used to measure currents. It is used without interrupting the circuit. Whenever the current which is to be measured is flowing in the leads, those leads are placed between the clamps. And the clamps need to be closed. On closing the clamps, the core is now closed, and the primary current starts inducing emf in the secondary winding and the value of current can now be checked.

Now in the absence of any primary winding also, the DC current will be displayed on the display. It is because of the earth’s magnetic field. Hence care must be taken to reset the device before measuring the DC current. Even the magnitude of DC current would vary as we move or rotate the clamp meter.

There are basically three types of clamp meter such as

In multi meter apart from current, we can also measure voltage, resistance, inductance, and capacitance. A clamp meter is used only to measure current.

Ranging from all industrial applications to laboratory applications, these meters are used widely.

Hence we have seen the working principle of clamp meter and its types. The best part of this meter is it does not interrupt the circuit. It is interesting to think that can clamp meters measure voltages? If yes then how?