You are here: Home / Electrical Circuits / Electrical / What is a Steam Turbine : Working, Types & Its Applications

Steam turbines are available from the past 100 years and these are manufactured and used in different plants like the combined cycle, fossil power, nuclear plants. The first steam turbine was designed in the year 1884 by Sir Charles A. Parsons. This turbine was simply generated 7.5 KW of energy and used in Newcastle, England for lighting an exhibition. At present, steam turbines can generate above 1,000 MW of energy which is used in major power plants. The design of the turbine is the same but the generation capacity has improved enormously. It was worked on the principle of Thermodynamics second law as well as Carnot’s Theorem. This article discusses an overview of the steam turbine and its working.

What is Steam Turbine?

Definition: A mechanical device that is used to remove thermal energy from pressurized vapor to transforms it into mechanical work. As the turbine produces rotating motion, then it is mostly used to drive electrical generators. Most of the electricity generation in the US country is using these turbines. These mechanical devices work through steam by spinning the blades constantly. Thus, these blades convert most of the potential energy of the steam into kinetic energy, and then the turbine is used to drive a generator for generating electricity. 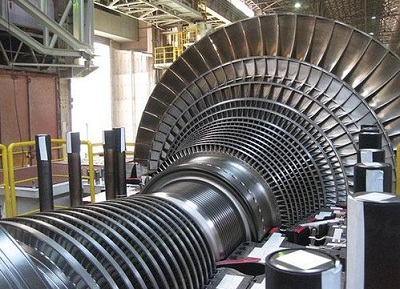 The steam turbine includes some essential parts like rotors and blades. Here, the set of blades is called a stag which has steam inlets & outlets. They also include governors which are known as independent mechanisms, used to ensure the security act of the turbine.

The working of a steam turbine can be done by using a heat source like coal, gas, solar, and nuclear to warm the water to very high temperatures until it is changed into steam. Because steam turbines generate rotary motion and they are allied to a generator with the help of an axle, so it generates energy through a magnetic field to generate an electric current.

Steam turbines work by using high-pressure steam for activating electrical generators at extremely high speeds. So they turn very fast compare with wind otherwise water turbines. In a power plant, the rotation speed of a steam turbine is 1800 to 600 RPM (repetitions per minute). So it is double times faster than the blades turn over a usual wind turbine. They use a gearbox to make the generator run for generating electricity. This turbine is also considerably more solid compare with a steam engine.

These turbines are efficient & extensively used in several applications by using the source of thermal energy. But these turbines are usually power-driven through fossil fuels like coal and also they used nuclear energy as a resource.

There are two basic types of steam turbines used namely impulse type and reaction type which is discussed below.

In this type, the rotary blades are similar to deep buckets because the high voltage steam is projected from permanent nozzles within the casing. Once the steam hits the blades/buckets), then the shaft of the turbine will rotate. The two stages of pressure like high & intermediate of a turbine are generally impulse type turbines.

In this type of turbine, the steam expands in both fixed and moving blades constantly when the steam supplies over them. The pressure drop occurs continually over both the blades like fixed and moving. Even though there are some other types of turbines there like reheat type, cross-compound, single casing, tandem, exhaust, condensing, radial flow, and axial type turbines.

The difference between these two turbines includes the following.

The advantages of steam turbines include the following.

The disadvantages of steam turbines include the following.

The applications of steam turbines range from medium to large scale industries like the following.

1). What is a steam turbine efficiency?

2). Which turbine is more efficient?

The most efficient types of turbines are impulse type because they used wherever the flow of steam is less & the pressure from the inlet is high.

3). How do you increase the steam turbine efficiency?

There are three methods used in the turbine to increase the efficiency like reheating, regenerative feed heating & through binary vapor cycle of the turbine

4). What is a steam turbine generator?

It is the main component of power conversion in the power plant. The main function of this generator is to change the energy from thermal to electrical from the steam of the generator.

A steam turbine functions through heating water to very high temperatures until it is changed into steam, after that the steam energy can be used for rotating the blades within a turbine to generate mechanical otherwise rotating energy.

Thus, this is all about an overview of steam turbine, types, working principle, and its applications. From the above information, finally, we can conclude that this is one kind of mechanical device used to extract the thermal energy from the stream to change it into mechanical work as it generates rotating motion and it is mainly used to drive electrical generators. Here is a question for you, what is the power range of steam turbines?