You are here: Home / Electrical Circuits / What is an Instrumentation Amplifier : Working & Its Applications

Either it is household or business necessity, we require sometimes to know the regulation and measurement of some physical conditions. For instance, in a diary organization, we require to calculate the humidity and temperature levels to maintain good product quality and accurate temperature levels for the product. So, these changes have to be transformed into electrical quantities, and then those need to be amplified. So, the amplifiers that are employed for this purpose are termed as “Instrumentation Amplifiers”. This article clearly explains to you the concept of instrumentation amplifier derivation, definition, it’s working, and others.

What is the Instrumentation Amplifier?

Instrumentation Amplifier which is abbreviated as In-Amp comes under the classification of differential amplifier that is constructed of input buffered amplifiers. These buffer amplifiers reduce the factor of impedance matching and making the amplifiers especially appropriate for measuring purposes. The signals those have similar potential values on both sides of the input will be canceled and the signal those have potential variation will be amplified.

This amplifier is mainly used within the frequency range of 1MHz thus delivering high gain at the output. Removing the CMMR value in the input signal, it amplifies signals. In-Amp also has multiple features such as minimal DC offset values, high level of input impedance, CMMR, open-loop gain, and minimal noise.

The below circuit of In-Amp describes the working principle of the amplifier. Here, the amplifier is constructed using two operational amplifiers having V1, V2 as input voltages, and O1 and O2 as outputs of op-amp 1 and op-amp 2. Three resistors R1, R2, and R3 are used and at the output is delivered through the difference amplifier and Vout is considered as the amplification output of the input signals.

As the two operational amplifiers placed at the input stage draws no amount of current, the voltage drop is in linear proportion to the voltage variation between input voltages. This develops current which flows through the resistors and the developed voltage is supplied as input to the differential amplifier. 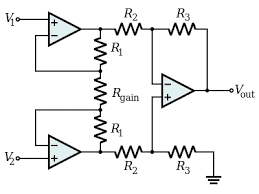 Here, Rg is the external resistor that is placed in between the IC pins.  When the pins are not connected, then amplifier gain will be one, but with different resistors, various values of gains can be obtained. The current flowing through Rg and R1 will be preferably similar because the current at the input stage of the operational amplifier is null.

This is a brief about In-Amp working. From the circuit, an instrumentation amplifier using op-amp derivation can also be done and it is as below:

The output is given by

By considering only the input side of the instrumentation amplifier, the derivations for O1 and O2 can be also known and the input stage is as follows:

As there is no current flow through the two input operational amplifiers, the current flow between G and H is

From the above two equations,

When the output at differential amplifier is considered then

This is the derivation and the output of the instrumentation amplifier

The two conditions that have to be considered here are the gain of the In-Amp can be regulated by varying the value of Rg. And differential amplifier provides signal attenuation for the In-Amp.

AD624 is the one In-Amp IC having the characteristics of minimal noise, increased precision rate, and principally constructed to implement in pressure transducers, load cells, gauges, and many others. The other features such as minimal gain of temperature coefficient, increased linearity allow this IC even to implement in the data acquisition networks. This IC functions at an input and output voltage drift values of <0.25 µV/°C and 10 µV/°C correspondingly. The CMMR value of AD624 is 130dB when the gain is 500 and the maximum non-linearity obtained at unity gain is 0.0001%. Furthermore, the instrumentation amplifier IC has extensive AC performance. 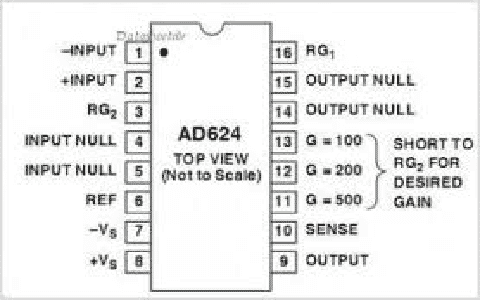 The maximum rating values for this In-Amp are as follows:

Few of the input consideration those has to be considered are:

This is a brief explanation of the instrumentation amplifier IC.

A few of the advantages of the instrumentation amplifier are

When an In-amp is embedded with a transducer bridge, it can be employed in multiple applications and those applications are termed as data acquisition systems.

Below are the foremost differences between op-amp and In-Amp