You are here: Home / Electrical Machines / What is Variable Reluctance Stepper Motor : Construction & Its Applications

What is a Variable Reluctance Stepper Motor?

A variable reluctance stepper motor is an electromechanical energy conversion device that converts electrical energy to mechanical energy. It works on the principle of reluctance, according to which magnetic flux always flows through a minimum reluctance path. The stator poles are excited with three-phase or single-phase supply and the rotor is either made of permanent magnets or excited with single-phase supply to obtain the rotor magnetic field. 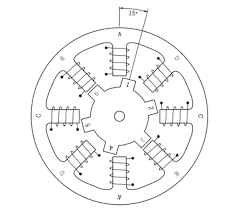 Now to obtain variable reluctance, the switching circuit is designed such that, first R phase has maximum magnetic energy, then Y phase and then Y phase. So when the R phase has maximum magnetic energy, the rotor will try to align itself into the R phase. After a delay of some time, the maximum energy is shifted to the Y phase. At this time, the rotor position is shifted to the Y phase through a clockwise rotation. The rotation angle of the rotor is defined as the step angle given by Step Angle = (360/m*Nr), where m is the number of phases and Nr is a number of rotor poles. Interestingly, it may be noted that, in this motor, the number of stator and rotor poles need not be the same. 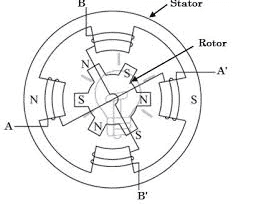 Apart from the stator and rotor structure, the reluctance motor has switching circuits to produce variable reluctance.

Generally in an inverter circuit, the delay angle triggering each device is 60 degrees. It can be varied periodically. One more method of obtaining the variable reluctance is by designing the rotor and stator poles such that, air gap among them is varied. Varied in the sense, at one instant, the air gap is maximum and at the other instance, the air gap is minimum. This is obtained by using a toothed type of rotor. 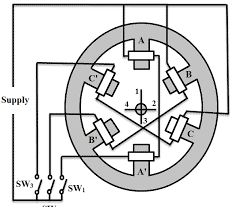 Once the energy is shifted, by using the switching circuit, the rotor also shifts its position to the new phase where reluctance is minimum. The angle by which it rotates is called a step angle. It is defined as Step Angle = (360/m*Nr), where m is the number of phases and Nr is a number of rotor poles. For six poles, 4 phase the step angle would be approximately 15 degrees. It can be noted that the step angle for a particular machine is fixed, as we can’t vary the number of phases or number of rotor poles.

The advantages of variable reluctance stepper motor include the following

The applications of variable reluctance stepper motor include the following.

As mentioned, due to its stepped rotation it has less number of applications. Mostly these types of motors are used in toys, tape recorders, advanced clocks, printing machines, etc.

Hence, this is all about an overview of the variable reluctance stepper motor. We have seen the operation, constructional aspects, and advantages of the stepper motor. By varying the firing angle we can vary different control aspects of the machine. And we can form a closed-loop operation of the motor circuits and using controllers like PID, space vector controller, etc. It is interesting to think in variable reluctance stepper motor, is it possible to obtain the rotation of the rotor in both clockwise and counterclockwise direction?