You are here: Home / Electrical Machines / What is Split Phase Induction Motor : Working & Its Applications

What is Split Phase Induction Motor?

This device is also called a resistance start motor. The split-phase induction motor theory is explained as follows:

The device is mainly included with a stator and single-cage motor. The stator device consists of two windings which are auxiliary and main windings. In the construction of this device, it has a centrifugal switch which is present inside the motor, it has two shields acting as support for the rotor shaft. This switch has a series connection with the starting/auxiliary winding and this switch is used for the purpose of disconnecting auxiliary winding from the primary circuit.

This induction motor does not contain capacitance in the main circuit, the phase shift to the main current is attained through thin conductors where it leads to a high level of resistance to reactance ratio. By increasing the resistance value, the primary winding can be utilized while starting or else it leads to overheating. The device has minimal torque initially, because of the less phase angle between the two winding currents. 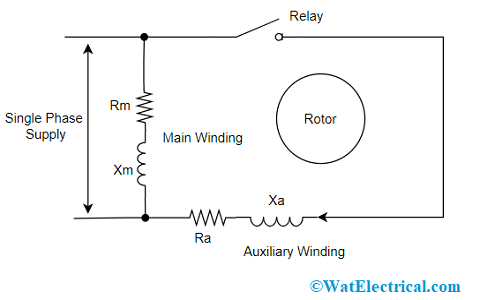 Because of the non-uniform rotating field, the current across both the windings is not similar. So, starting torque is minimal which is almost 1.5 – 2 times more than initial running torque.

This relay is in series connection with the primary winding. Initially, there will be a huge amount of current flow in the circuit, and this makes the relay contact move to the closed position. In this way, the auxiliary winding is internal to the circuit and when the motor reaches to specified speed level, then the current flow in the relay tends to decrease so that the relay opens, and auxiliary winding will be disconnected from the power supply. This allows the motor to function only through the main winding.

The phasor diagram based on the working principle for this motor is shown below.

In the below picture, ‘n0’ corresponds to the location where the functionality of the centrifugal switch starts to function. The initial torque of the split-phase induction motor is nearly 1.5 times more than the load torque. Whereas the maximum torque is almost 2.5 times more than the complete load torque when the synchronous speed is 75%. The motor’s initial torque is nearly 7 to 8 times high when compared with the entire load.

The directional path of the motor can be altered by overturning the line connection for either of the windings. But this overturning is possible only when the motor is in standstill condition.

There are mainly five types of split-phase induction motor and those are:

The advantages of split-phase induction motor are:

The disadvantages of split-phase induction motor are:

The application of the motor consists of various loads that are utilized for general functionality.

This motor is employed in conditions where the distribution of the three phases is not necessary.

This motor does not hold the ability to provide a high amount of initial torque, so that the load has to be very minimal, and also mechanical gain has to be used to stand as support for the motor to start

This is all about split phase motor. The article has explained the concepts of induction motor with split phase, its working principle, types, advantages and disadvantages, and applications. Also, know how the performance varies in each type of split-phase induction motor and their efficiencies?