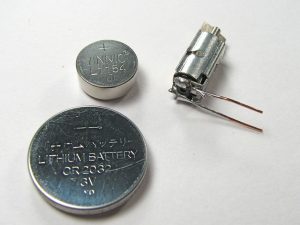 The working principle of both the vibration motors is discussed below

A Coin or flat-sized motor works with the help of ring magnet, power supplied brushes connected to ring magnet, weight and a rotor with the commutation points connected at the front side and the coils connected on the backside. The commutation points and the brushes end are connected together. This construction will strengthen the rotor electrical coils. This will generate a magnetic field, and this is as much as necessary to interrelate with the ring magnet and causes rotation. A force is produced because of a magnetic field. This force allows the weight to get transferred. The continual movement of weight generates a changing force so that it is felt as a vibration. The commutation points are utilized in altering the polarity pairs; thus, the rotor rotates, and the coils are perpetually switching the polarity.

Here, it has an improperly balanced vibrating motor. It means that the shaft is connected to an off-centered weight so that a centrifugal force is developed while its rotation. The improperly balanced force causes a high-level speed displacement in the motor and this creates vibration. The generated centrifugal force creates vibration in the motor and allows the motor to vibrate in the X and Z axis.

The frequency of the vibration can be calculated as

and Force is calculated as

Where ‘m’ corresponds to mass the eccentric weight

The internal design and construction of both the motors are the same and the components are as below:

It is the non-stationary section of the rotational electric motor. The construction and construction between the wires and the magnetic field generate torque. In a few of the constructions, the rotor operates as a motor’s armature, where the input voltage is distributed.

It is the stationary section of the rotational electric motor. It operates like a magnetic field where its contact with armature develops motion. It even functions as an armature that receives force from the motor coils.

It is a rotating electrical switch wherein specific kinds of motors or generators occasionally stores the current flow between the external circuit and the rotor. As it is a switch, it has extended life period, observing the number of circuits creates and collapses which happen in the normal procedure.

These are the coil turns. All the coils are connected in a way so that it develops a magnetic field when the electricity is passed through these.

It is the assemblage of two thin metal plates where copper wires are twisted all across the armature’s three poles. Its functionality is to transform magnetic energy to that of kinetic energy.

In the shaft, these brushes develop current in between the coils and stator. When the brushes are worn out, motor life also will be ended. So, depending on this aspect, brushless motors which are termed as BLDC are implemented to enhance motor life.

The shaft is connected with a weighing element so that it generated vibration because of mass. Through this, the pressure and the magnitude can be easily modified and regulated.

For a mini vibration motor, the specifications are as below.

The operation of a vibration motor through Arduino can be done on the Genuino UNO board. Before this discussion, it has to be noted that the DC vibration motors operating, and initial currents have to be limited because these are high in value than that of microcontroller’s pins.

There has to be a component in between the motor and the microcontroller, and it is the transistor. These transistors operate as ‘Switch’ to ON and OFF the motor. They can be easily regulated either by connecting to a minimal current source or a high current source. Transistors help to drive the motor safely at the rated voltages. 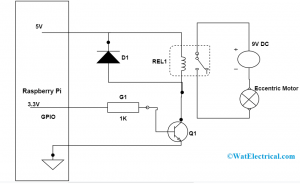 The transistor functions as a switch that ON and OFF the motor. It has to be noted that in N-Type transistor when it is in ON condition and when the voltage is above the threshold voltage of the transistor applied to the gate.

It is the utilization of progressive vibration forms and waveforms to transmit data either to the operator of the user.

2). What develops vibration in the motor?

A huge mass substance in a spinning element will generate vibration when the unstable weight revolves across the machine’s axis thus it generates centrifugal force.

3). Can vibration be transformed into electric energy?

5). How Arduino stability can be increased?

The permanence of the vibration rotor using Arduino can be improved by Schottky Diode, Pull-Up resistor, Pull-Dow resistor, and EMI suppression capacitor.