We all know that the basic passive linear elements in the domain of electrical and electronics are capacitor, resistor, and inductor. These elements are integrated to form various types of electric circuits. The major circuit types are RC, RLC, LC, and RL where these combinations exhibit major kinds of performance which are essential to analog electronics. In specific, they hold the ability to perform as passive type filters. In a practical way, capacitors are majorly chosen than inductors as the design of those is simple and easy.

Both the RL and RC type circuits can be created as a single-pole filter. Based on whether the ‘L’ or ‘C’ reactive element is in series or parallel connection with the load, the type of the filter can be known as low-pass or high-pass. This article mainly describes on RL circuit, its definition, differential equation, time constant, RL circuit differential equation, and other related concepts.

What is RL Circuit?

This circuit is also termed as RL filter or network where the RL circuit definition is stated as that it is an electric circuit that consists of the major elements resistor and inductor which are connected together those are powered by either current or voltage source. Because resistor exists in the circuit, the RL circuit will consume energy which is similar to RLC or RC circuits.

Below is the basic RL series circuit where the components inductor ‘L’ and resistor ‘R’ are in series connection with a supply voltage of ‘V’ volts. Assume that the current flow through the entire circuit is ‘I’ amperes and the flow of current through resistor and inductor is IR and IL correspondingly. 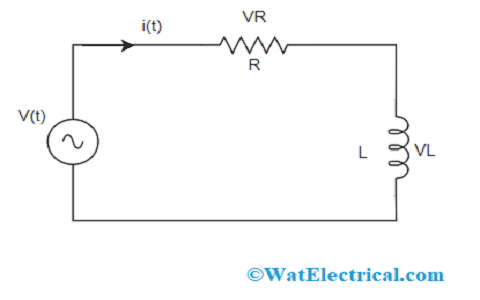 As the resistor and inductor components are in series connection, the current flow all across the circuit is the same which is

Based on Kirchhoff’s voltage law which defines that supply voltage equals the sum of the voltage across resistor and inductor. So,

When the above shown RL series circuit is connected with a steady voltage source and a switch then it is given as below:

Consider that the switch is in an OPEN state until t= 0, and later it continues to be in a permanent CLOSED state by delivering a step response type of input. This initiates the current flow across the circuit in a steady manner but not reach its peak value ‘Imax’ as defined by the ratio of Ohm’s law which is V/R. This restraining factor is because of the existence of self-generated EMF.

This EMF is generation is because of the development of magnetic flux. Later on, after some period of time, the voltage counteracts this EMF where the current flow remains constant and induced current gets to ‘0’ value. 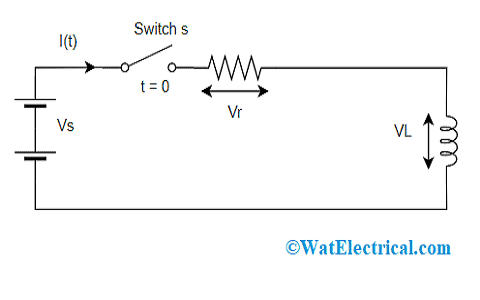 As discussed above, that

The voltage drop across inductor and resistor is given by

So, the RL circuit formula is given by

When the current value reaches ‘0’, then the above equation becomes first order RL circuit differential equation where this can be modified to provide current value at any time instant which is

Here, ‘V’ is measured in volt

‘R’ is measured in ohm

‘L’ is measured in Henry

‘t’ is measured in the second

The time constant of a series RL circuit is represented by L/R where V/R corresponds to the ultimate steady-state current which happens after 5 time steady values. When the current value reaches the peak steady-state which is at 5τ, then the coil’s inductance lessens to ‘0’and behaves like a short circuit. So, the current flow across the coil is restricted by the resistive component. The graph that depicts current v/s voltage/time attributes is featured as the transient response of the RL circuit.

As it was already discussed that

The VR will have similar growth and shape exponentially like current, whereas VL consists of an exponential factor Ve-Rt/L. Then the voltage drop across ‘L’, possesses an initial value equals to the value of battery voltage at t = 0. Or else, V across ‘L’ will have a value when the switch is initially closed and then reduces to ‘0’ in an exponential way as shown in the below graphical curve. The transient time of the inductive circuit is known by its relationship with resistance. 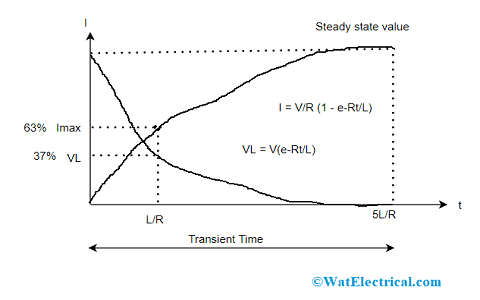 So, in an RL circuit when the frequency is increased

In an RL series circuit, some amount of energy is dissipated by a resistor and some amount is consecutively accumulated and returned by an inductor where

So, the entire power factor of the RL circuit is given by the power dissipated by the resistor along with the power absorbed by the inductor

The power triangle is shown below 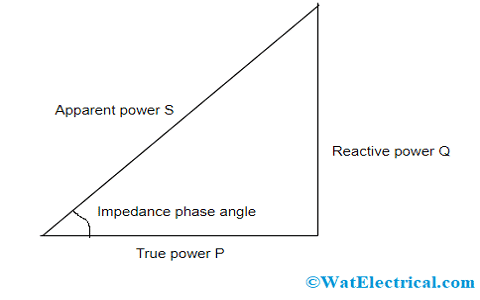 The phasor diagram of a series RL circuit is represented as below: 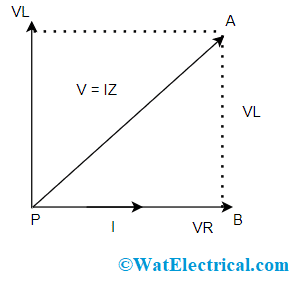 To draw a phasor diagram for the circuit, below are the steps to be followed

When we consider a right-angled triangle PAB as per the above diagram, then

Where ‘Z’ is the entire amount of opposition for the direction of alternating current and this is called as the impedance of the RL circuit.

The Impedance of RL Circuit

In this RL circuit, impedance contradicts the direction of alternating current. Here, impedance is defined as the combined impact of resistance and inductive reactance of the circuit. The impedance is shown by 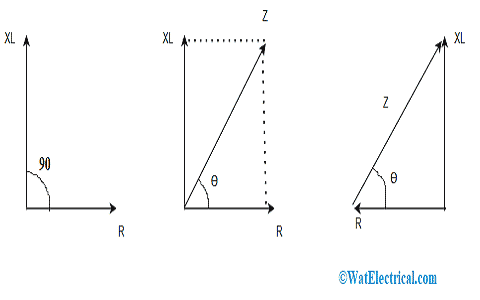 In the case of a right-angled triangle, the phase angle value is given by ϴ = tan-1 (XL/R)

Consider the below pictures

The impulse response of the RL circuit for each voltage is considered as the inverse Laplace transform of a specific transfer function. This characterizes the circuit’s response to an input voltage which includes an impulse.

For an inductor voltage, the impulse response is given by:

Here, u(t) is Heaviside step function and τ is the time constant represented by L/R

In the same way, for a resistor voltage, the impulse response is

The natural response of an RL circuit is termed as zero input response where this response defines the circuit’s performance when it reaches constant voltage and current values. At this condition, the circuit gets disconnected from the power source. This is called ZIR as there is a null power source.

The natural response of this circuit is given by

The prominence and usage of a parallel RL circuit are less when compared with a series RL circuit if not it is driven by a current source. It is not much considered because Vout equals Vin which means that the circuit does not hold the ability to function as a filter for supply voltage. 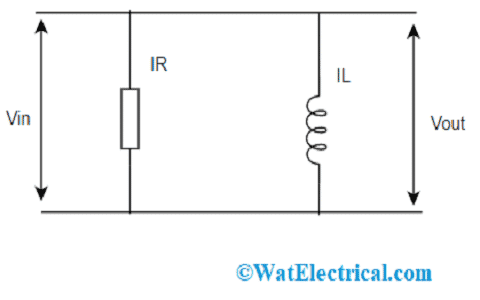 In consideration of complex impedances,

As per the above equation, the inductor lags the resistor by an angle of 900. The parallel circuit is observed as the output of multiple amplifier circuits as it insulates the amplifier from the capacitive loading impacts at higher frequency levels. As because of the phase shift effect by capacitance, few amplifiers tend to be unstable and oscillate which shows the impact on sound quality.

The RL circuit uses consist of the following:

This is the overview of an RL circuit. This article has provided a detailed analysis of RL circuit definition, derivation, power factor, impedance response, its formulas, circuit diagram, and uses. In addition, know what is the step response of the RL circuit and how does it impact the circuit’s performance?